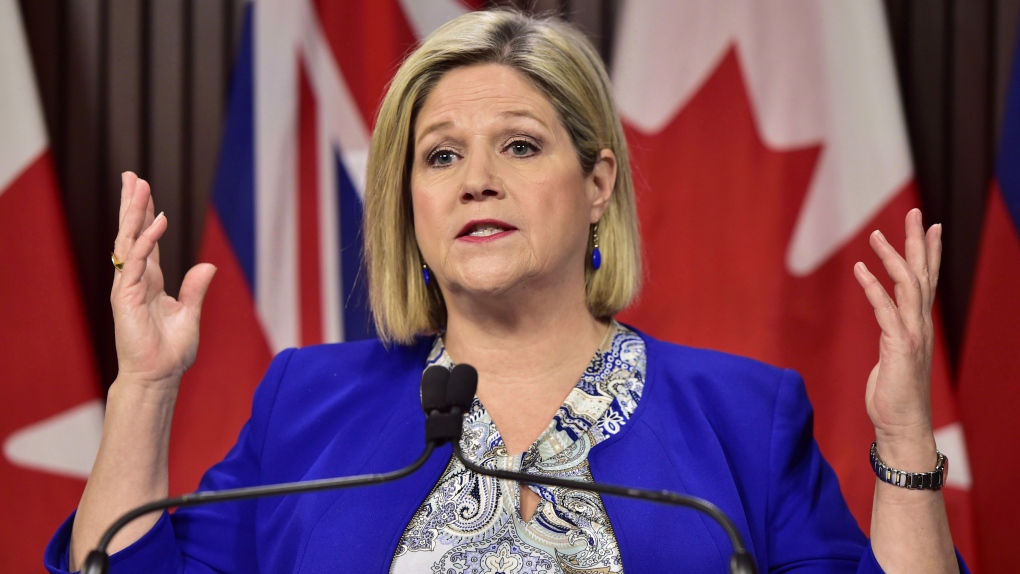 TORONTO -- A planned restructuring of Ontario's public health units should be put on hold until the current novel coronavirus outbreak is over, the leader of the provincial Opposition said Wednesday.

The province, she said, must instead focus all its efforts on its response to the latest outbreak.

"This is really about asking the government to take a break from where things are now in the upheaval of public health," she said. "Wait for this virus, and our response to have passed by, and then have the experts ... ensure that the next time something like this happens that we've learned lessons."

Horwath lauded public health officials across Ontario for their response to the health emergency, and said she does not believe the province is in any danger because of current funding levels.

Health officials in Ontario have identified three cases of the new coronavirus that began in China late last year and has killed hundreds in that country and sickened more than 24,500 people globally, including five in Canada.

Last year, the Ford government announced it planned to reduce its public health cost-sharing levels but later back-tracked when the scheme sparked outrage amongst civic leaders, who said the cuts would result in reductions to breakfast programs, vaccination programs, and water quality testing.

The government also said at the time that it planned to begin a sweeping amalgamation of public health units by 2020-2021, which would see those units serve larger geographic regions.

Health Minister Christine Elliott appointed special adviser Jim Pine last fall to conduct consultations with municipalities, who had warned that the amalgamation, coupled with changes to public health cost-sharing with the province, could jeopardize services and result in front-line staff layoffs.

Horwath said work on the proposed amalgamations should be halted immediately.

"Now is not the time for people in public health units across the province to be distracted by restructuring plans," she said. "Now all hands on deck should be focused on the coronavirus."

The government has said that it intends to move forward with its plan to "amalgamate certain units."

A spokesman for Health Minister Christine Elliott said Wednesday the province is ready to respond to the novel coronavirus.

"It's disappointing then that (Horwath) would seek to score political points by calling into question the province's preparedness to keep the public safe," Travis Kann said in a statement, adding that public health officials have briefed the NDP three times on the coronavirus response.

This report by The Canadian Press was first published Feb. 5, 2020.