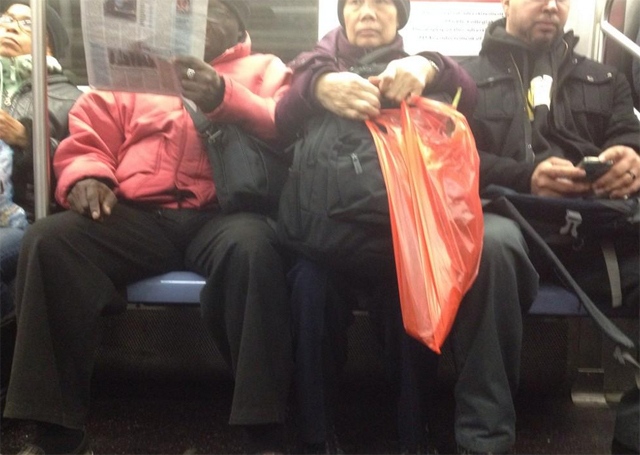 A movement against so-called "man-spreading" seems to be gaining popularity among public transit users, including those in Toronto. (@EverettToy/Twitter)

A movement against so-called "man-spreading" seems to be gaining popularity among public transit users, including those in Toronto.

"Man-spreading" refers to male passengers who sit with their legs parted in a V-shape on crowded subways and buses.

The inelegant male posture has been the bane of many public transit users. It has been written about in blogs and those who are guilty of it have been publicly mocked on social media.

The campaign to stop "man-spreading" has since been picked up by New York's public transit body.

The Metropolitan Transportation Authority (MTA) is set to launch a series of public service ads that encourage male passengers to stop infringing on the space of their fellow passengers, the New York Times reported over the weekend.

The launch of the upcoming campaign has caught the attention of many public transit users, including those in Toronto who say that "man-spreading" is also a problem in the city.

I am willing to help #AndyByford & #TTC with ideas on how to improve rider experience. i.e., can we address this? http://t.co/ylAJP2uvck

MTA takes on "manspreading" on New York subways. Would love to see something similar on the TTC http://t.co/VaeK7ugNOi

@analyticeye @NYMag I KNOW! Would love if the #TTC could make a poster that illustrates how subway manspreading and nail clipping are wrong.

Not everyone, however, is on board with the public shaming tactic.

In a Reddit post entitled "Look! 'Manspreading' doesn’t happen only in Toronto!," some commentators called the MTA's campaign "passive aggressive" while others said the ads were unfairly targeting male passengers.

"It's basic anatomy," Redditor QuadrilabialTrills said. "Men have some extra bits between their legs that make sitting with their legs far apart more comfortable."