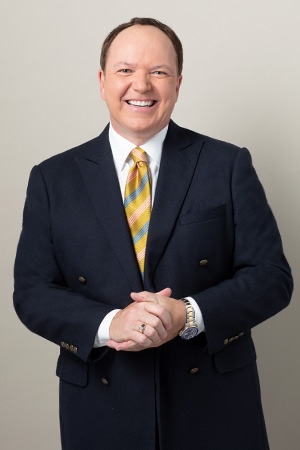 As of February 2021 Tom Brown is no longer with CTV News Toronto.

Brown joined CTV News Toronto in 2004. Previously, he worked in radio for 18 years in several Canadian radio markets including Moncton, Winnipeg, and Regina before an opportunity to jump into television came along. After filling in for the weather anchor at a Regina television network, Brown decided television is where he belonged and never looked back.

His live, on-location weather broadcasts from across the Greater Toronto Area have become his trademark, as Brown delivers updates from various community events and festivals showcasing everything Toronto offers. Brown has delivered live weather broadcasts alongside three Canadian Prime Ministers.

Brown has had many highlights throughout his career, but the one he’s most proud of is the annual Toy Mountain Campaign with the Salvation Army, in which millions of dollars in toys and donations have been collected for children across the GTA. His efforts were recognized when he was presented with a Queen’s Diamond Jubilee Medal for his work with Variety Village. His community work also earned Brown the Lieutenant Governor Community Volunteer Award.

Brown is from Toronto, and loves being a father to his two kids, one of whom is following her dad’s footsteps by pursuing a career in television.

Brown speaks English and graduated from Malvern Collegiate Institute in Toronto before attending Fanshawe College in London, where he graduated with a Broadcasting Diploma.