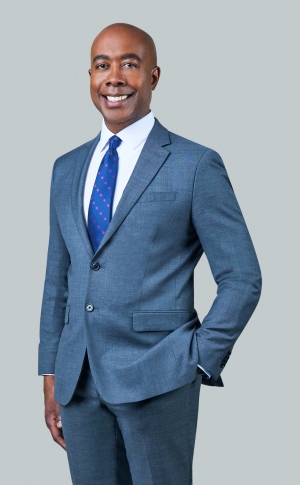 Nathan Downer is the Co-Anchor of Toronto’s most-watched local newscasts: CTV News at Noon and CTV News at Six.

Downer was previously an anchor and reporter for CP24 and an anchor of LIVE AT FIVE on CTV Toronto. Downer is an experienced radio and television broadcaster. He has covered the city’s most significant news stories during his 11 years with CP24, from federal, provincial, and municipal elections, to the Bruce McArthur serial killings investigation, and the 2019 NBA championship win by the Toronto Raptors.

Prior to joining the CP24 Team, Downer’s work as a reporter for Global TV earned him three RTNDA awards in 2005, including a national prize for a feature story.

His start in TV came as a sideline reporter in 2002, where he covered university football and basketball. He often appeared as a guest on TSN’s OFF THE RECORD before it signed off in December 2015. He was also hired to put pen to paper for Raptor Insider Magazine in a feature called Last Page. From 2009- 2011 Downer was the in-stadium announcer for the Toronto Argonauts.

Before moving into television, Downer shaped his career as the Producer and Co-Host of a weekly sports talk program on FLOW 93-5. His impressive performance quickly earned him the coveted position of News Director.

In the summer of 2000, Downer made his debut in the media business as co-host and producer of the CHIN radio weekly talk show INSIGHT.

Downer sees his career in the broadcast industry as a tool he can use to inform, engage, and communicate. He enjoys hosting many special community events and is an active member of the Canadian Association of Black Journalists. He's also involved with charity work, including Camp Jumoke and Helping Hands Jamaica, and is on the Advisory Board for the Sickle Cell Awareness Group Ontario.

Downer received the Excellence in Media Award, a national prize presented by the African Canadian Achievement Awards (ACAA) in 2013. In 2012, the Black Business and Professional Association (BBPA) honoured Downer with the 2012 Distinguished Men of Honour Award. He was also presented with Media Award of Excellence from Sickle Cell Awareness Group of Ontario in 2011.

Raised in Scarborough, Ont., Downer studied at the University of Toronto and George Brown College and loves living in the east side of downtown Toronto with his family.