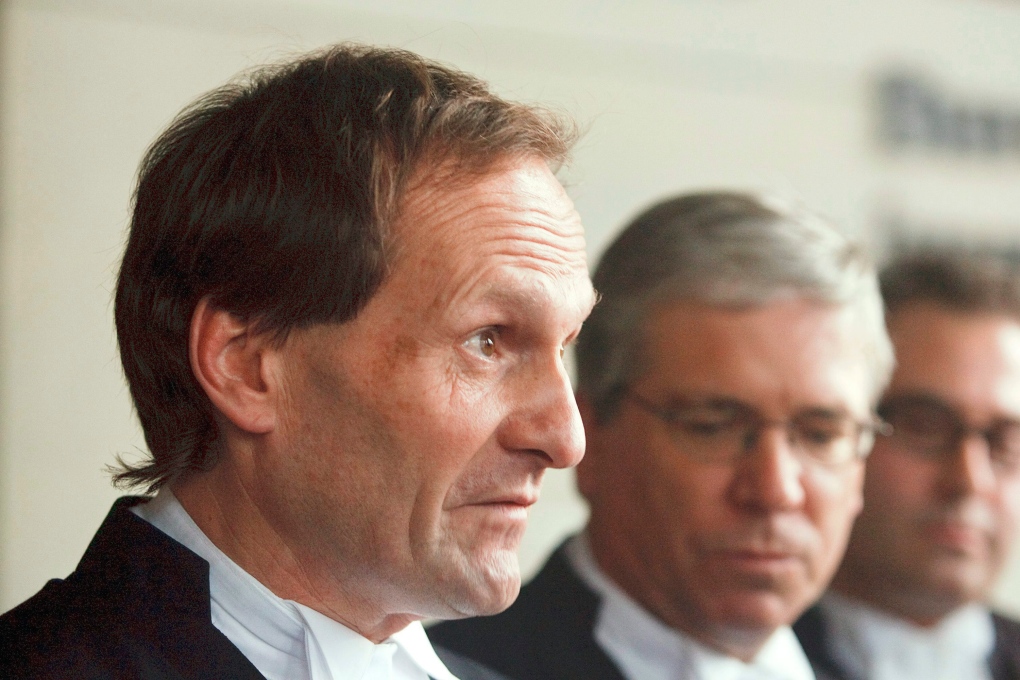 Crown council Kevin Gowdey reads a statement to reporters in front of the courthouse in London, Ont. on Thursday October 29, 2009 following the conviction of six men in the slaying of eight Bandidos bikers in April 2006 at a farm near Shedden, Ont. (Geoff Robins/THE CANADIAN PRESS)

TORONTO -- A group of biker gang members and affiliates who are serving life sentences for the slaughter of eight fellow Bandidos is moving forward with appeals of their dozens of murder convictions.

The internal cleansing of the Bandidos biker gang saw the bullet-ridden bodies of eight men stuffed into cars and abandoned in rural southwestern Ontario in April 2006. It's believed to be Ontario's largest mass slaying.

Six men were convicted, including the purported mastermind Wayne Kellestine, of 44 counts of first-degree murder and four counts of manslaughter between them. They all filed notices of appeal shortly after their convictions in 2009, but Appeal Court documents show five are only now proceeding, with four having secured lawyers who have filed written arguments.

In Kellestine's arguments he takes exception to being branded a "psychopath" at trial and to other "massively prejudicial bad character evidence," including Nazi symbols found on his farm where the murders took place.

"The difficulty in trying him fairly was greatly compounded by the all-out attack on his character mounted by many of his co-accused," Kellestine's lawyer writes. "They elicited extensive evidence portraying the appellant as frightening and deranged."

Despite raising the character issue, Kellestine's main argument on appeal appears to centre on what the judge told the jury about how they could use his statements to police.

The other men -- Marcelo Aravena, Brett Gardiner, Frank Mather and Dwight Mushey -- were portrayed at trial as power-hungry schemers or wannabes gunning for status in the outlaw motorcycle club.

Several are arguing on appeal that they should have been allowed to use the defence of duress.

"Kellestine had created an atmosphere of coercive oppression that encompassed an implied threat to kill Aravena if he did not do what Kellestine required," Aravena's lawyer writes.

The Crown argued at trial that the murders were the result of rising tensions between the dead men and the probationary Bandidos chapter in Winnipeg.

Kellestine, a member of the Toronto chapter, had become increasingly alienated from his Toronto brothers and allied with the Winnipeg men.

Court heard he had received orders from U.S. Bandidos officials to strip the Toronto men of their gang affiliation and start a new Canadian chapter, but at some point in the days or hours leading up to the killings the plan changed to mass murder.

The Crown's version of events was largely based on the testimony of a man who is now an informant but was a member of the Winnipeg Bandidos. He is the only one who was at Kellestine's farmhouse the night of the killings who is not now dead or in prison.

The Toronto men were summoned to Kellestine's farm for a meeting that night and the accused spent hours cleaning and loading a stockpile of weapons and that Kellestine said "if we kill one, we kill them all," according to the informant.

The Crown argued that comment formed a conditional plan to kill and therefore constituted first-degree murder.

Most of the men who are appealing argue that was an error by the judge, to allow the jury to convict them on what is known as "constructive" first-degree murder.

There were conflicting accounts about which men accompanied Kellestine as he led seven of the eight men out of his barn one by one to be killed. Gardiner was told to stay in the farmhouse that night and was only briefly in the barn, court heard.

Mather maintains he didn't kill anyone and that he was not a member or even official associate of the Bandidos. He was just a friend of Kellestine's who needed a place to stay, he argues.

Gardiner and Aravena argue they should have instead been convicted of eight counts of manslaughter.

The only man convicted in the eight killings who appears to not be pursuing his appeal is Michael Sandham, who used to be a police officer with the now-defunct East St. Paul force just outside Winnipeg, and who shot the first of the eight men.

No date has yet been scheduled for the appeals, but June or September are being considered.