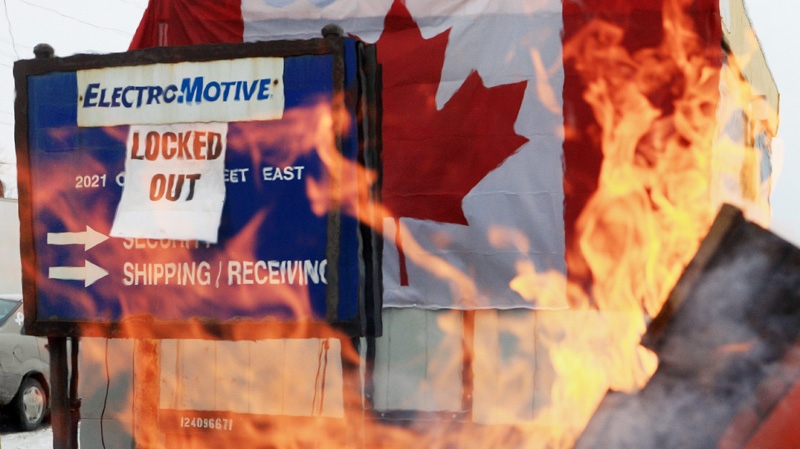 A fire burns on the picket line at locomotive maker Electro-Motive, in London, Ont., Friday, January 20, 2012.

LONDON, Ont. - U.S.-based Caterpillar Inc. needs to return to the bargaining table and strike a deal with its locked out workers at Electro-Motive in London, Ont., Premier Dalton McGuinty said Tuesday.

Ontario has fair labour laws and a history of respect between employers and workers that usually works well, but isn't working in this case, McGuinty told the London Chamber of Commerce.

"It's not working because the balanced, made-in-Ontario approach requires that unions and management sit down and talk to try to work out their differences, and so far the owners of Electro-Motive have failed to live up to Ontarians expectations," he said.

"We understand they are both free to determine their own tactics, but we also expect both sides to show some flexibility to try to land an agreement that acknowledges that the company needs skilled workers and those workers deserve a fair wage."

Caterpillar, which last week reported a 58 per cent increase in its quarterly earnings with a record profit of nearly $5 billion, locked out its 450 Canadian employees at Electro-Motive on New Year's Day, asking for pay cuts of up to 50 per cent.

McGuinty did not name Caterpillar in his speech, and insisted he doesn't like to involve himself in labour disputes as he urged the company to return to the bargaining table.

"I do not look to insinuate myself into these matters, but this one strikes me as a little bit different, a little bit out of the ordinary from what has gone on here in recent years," he said.

"You've got to approach these things with sincerity and in an earnest way, and that's something we'd all like to see, sooner rather than later."

The premier's staff said the Ministry of Labour was reaching out to Caterpillar on Tuesday afternoon, but the opposition parties said McGuinty should get on the phone and call the company himself instead of urging it to do the right thing through the media.

"Mr. McGuinty needs to show some leadership, call the president of Caterpillar and say let's get back to the table. He needs to step up," said Progressive Conservative critic Jeff Yurek.

"Right now he's saying it through the media. Those are just words. He needs to put some action into those words."

The New Democrats said it was a "little discouraging" that McGuinty would travel to London, mention the lockout in his speech, and yet fail to visit the workers on the picket line at Electro-Motive.

"Those workers deserve to have his presence on the line," said New Democrat Teresa Armstrong.

About two-dozen of the locked-out workers picketed outside the London hotel where McGuinty was speaking.

Electro-Motive is the only Canadian manufacturer of locomotive engines, and locals fear Caterpillar does not intend to keep the company open.

Prime Minister Stephen Harper used Electro-Motive as a backdrop in 2008 to promote big tax breaks for industrial capital investments, but the federal government has so far declined to get involved in the lockout.

McGuinty said Ottawa, the province and municipality should all be working together to help save the Electro-Motive jobs, but admitted so far that wasn't really happening.

"Well, we're going to do more," he insisted.