Toronto Maple Leafs star Auston Matthews said he regrets any actions of his that “put a distraction on the team or hurt or stressed any individual” on the heels of facing a charge of disorderly conduct and disruptive behaviour.

“Obviously this is not something that any of us really wish we were talking about today, but you know unfortunately it’s the situation we’re in,” the 22-year-old told reporters outside the team’s practice facility in Etobicoke on Wednesday morning. 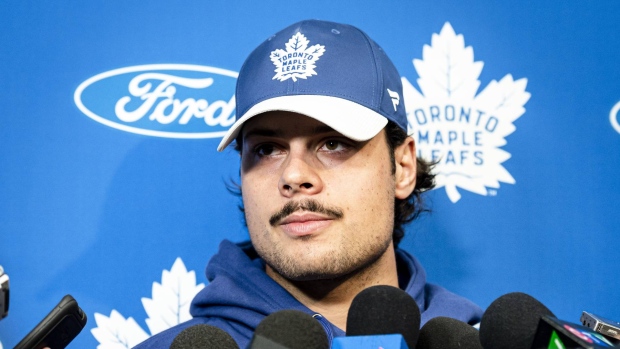 An alleged incident that took place on May 26 in Matthews’ hometown of Scottsdale, Ariz. was reported to officials, the Scottsdale Police Department confirmed to CTV News Toronto on Tuesday night.

According to the police report, a female security guard at a condo building in the city reported that she was filling out paperwork inside her vehicle around 2 a.m. when Matthews and a group of unidentified friends allegedly attempted to enter her vehicle.

The complainant said she then got out of her vehicle and confronted Matthews, who she believed was intoxicated.

The complaint then stated that Matthews walked away from the vehicle and allegedly appeared to pull his pants down before bending over and grabbing his buttocks. The police report did note that Matthews kept his underwear on during the alleged incident.

In body camera video footage of an interview with the complainant, provided by the Scottsdale Police Department, the woman is heard saying that she was sitting in her locked car and heard someone trying to open the doors to her vehicle.

“I jumped out of my car and I turn and I looked and I said ‘Can I help you? What are you doing trying to get in my car?’”

“They were laughing, one is swinging on a branch because I was parked underneath a tree in the roundabout. They came around (and) they are like ‘oh, we thought it would be funny to see how you would react if we got into your car in the back seat.’”

The complainant identified herself in the video as a military veteran.

“There’s three of you, there’s one of me. You could have done anything to me and I would be at a disadvantage because of that,” she is heard saying. “There is nothing about trying to get into my car at 2 o’clock in the morning (that is) funny. Nothing.”

The case was forwarded to the city’s prosecutor’s office for review and Matthews was not taken into police custody.

The hockey star said he takes “a lot of pride” in preparing for the upcoming regular season during his off time, as well as representing the Toronto Maple Leafs.

“I unfortunately, due to the situation, can’t really make any further comments, but that’s all I have and thanks guys for coming out,” he told reporters.

On Tuesday night, the Toronto Maple Leafs issued a statement saying they were aware of the complaint that was made.

“Auston is cooperating fully with relevant authorities but neither he nor the club will comment any further.”

Matthews signed a five-year contract extension with the Leafs worth $58 million in February.

The team’s regular season starts at home on Oct. 2 against the Ottawa Senators.