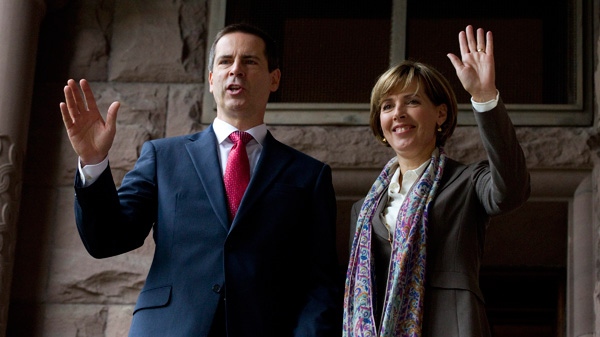 TORONTO - Ontario's Liberal government is facing allegations of abusive interference from a company that claims the province scuttled its application to develop a quarry for political rather than environmental reasons.

In an application for arbitration filed this week, St. Marys argues the government nixed the quarry to pander to local sentiment in an effort to hold on to a precarious Hamilton-area riding, and to benefit Liberal insiders who would have been adversely affected by the project.

"We're major players in the infrastructure in Ontario and we've been long-term investors, and this has shaken us," Richard Olsen, president of St. Marys Cement, said in an interview Thursday.

"Talk about an unstable investing environment."

The unproven claims, which come during the middle of a provincial election campaign, are in the application filed by St. Marys' Delaware-based parent company under the North American Free Trade Agreement.

Earlier this year, the company began a separate process of seeking a judicial review of the government's decisions in Ontario Superior Court along with $275 million in damages.

St. Marys began seeking various government approvals five years ago to produce high quality crushed stone from a 67-hectare operation in an area near Hamilton that is home to other operating quarries.

"We were confident that if the quarry was assessed on its technical and environmental merits, it would be approved," Olsen said.

From the start, however, the proposal ran into fierce opposition from area residents.

Among opponents were Mark Rudolph and Jan Whitelaw, who live next to the proposed quarry site, according to the arbitration application obtained by The Canadian Press.

Rudolph was an executive assistant to Liberal cabinet minister Jim Bradley, while Whitelaw was an environmental policy adviser to former Liberal premier David Peterson and chairwoman of the Greenbelt Foundation.

The foundation, which distributes government money, indirectly provided funding to quarry opponents, according to the filing.

In April 2010, Bradley, who was then municipal affairs minister, issued a rare minister's zoning order that froze the site's land-use designation as agricultural.

Bradley refused to comment because of the arbitration filing, an aide said Thursday.

When St. Marys attempted to challenge the order before the Ontario Municipal Board, the government scuttled that option in April 2011 with a "declaration of provincial interest."

"We were shocked that the government would resort to a minister's zoning order, which is the first time that has been used to scuttle a quarry application, and further shocked when the government chose to declare a provincial interest," Olsen said.

"There is no technical and no environmental reason for this -- it's purely political."

The anti-quarry lobby group Friends of Rural Communities and the Environment has denounced St. Marys allegations as "disappointing" and unfounded.

The accusations are "disrespectful to all the private and public professionals who have evaluated the project to date and have made a professional decision to recommend that the project should not proceed," the group said on its website.

"Our communities obviously disagree with the company's interpretation of events and suggestions that the provincial government's decisions were made inappropriately or for improper purposes."