Environmental assessment to be conducted on mega-quarry 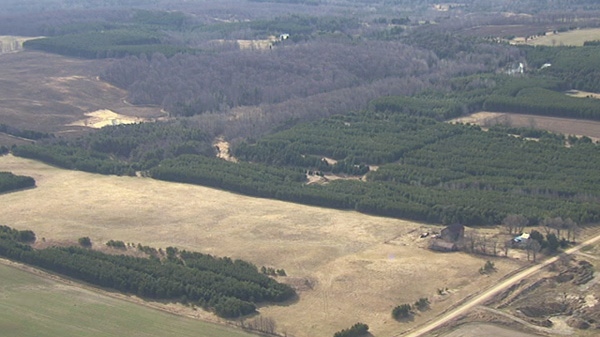 Site of the proposed quarry north of Shelburne, Ont.

The Ontario government will conduct a full environmental assessment on a mega-quarry planned for southern Ontario.

The announcement was made at Queen's Park Thursday evening. Senior government sources told CTV Toronto's Paul Bliss that the assessment will be carried out before any approval is given to build the second largest rock quarry in Canada

The mega-quarry is planned for a site on Highway 124 near Shelburne, Ont., about 100 kilometres northwest of Toronto.

In a statement published on Thursday, Ontario's Environment Minister John Wilkinson said that after a review of the technical reports and because of the "unique nature of the Melancthon quarry proposal, I believe a full environmental assessment is necessary."

Normally, a full environmental assessment is not required. However residents in the Shelburne area have been raising concerns to the Liberal government about the environmental impact the project will have.

Wilkinson said that the decision to conduct a full assessment was a joint one made with the minister of natural resources.

"After careful consideration, the minister of natural resources and I have agreed to bring forward a regulation making Highland Companies subject to the requirements of the Environmental Assessment Act," he said.

Backed by an American company, the quarry will tap into one billion tonnes of limestone deposited north of Orangeville. It is estimated that as much as 600 million litres of water will have to be pumped from the quarry each day due to the high water table.