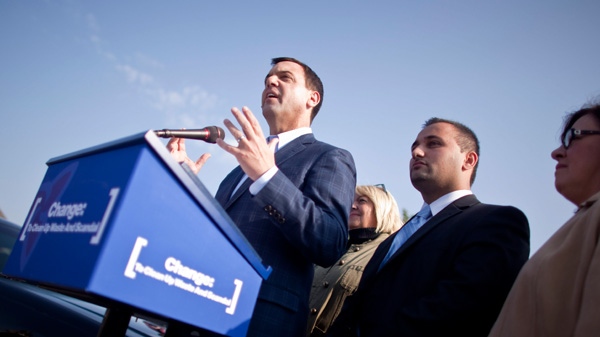 TORONTO - Progressive Conservative Leader Tim Hudak and NDP Leader Andrea Horwath will stump for votes in the Toronto area on Day 9 of the provincial election campaign.

Hudak has stops planned at a Canadian Tire in Richmond Hill, a candy store in Unionville and a party event in Markham.

Horwath will be at Ryerson University and Queen's Park in Toronto before an evening meeting with supporters in Brampton.

Nominations close Thursday for the Oct. 6 election and Equal Voice says there has been a modest increase in female candidates running for office.

As of Wednesday, there is a total of 130 women running, representing 30.4 per cent of all candidates across the 107 Ontario ridings.

While this is an improvement from the 2007 numbers, the group says there are only four more women running across the four major parties.

"Two parties, the Liberals and the NDP, have more than one third female candidates," said spokeswoman Lesley Byrne.

University of Toronto students are hosting a debate with Trinity Spadina candidates on Thursday afternoon.

Candidates from the riding have been invited to discuss provincial politics, with a specific focus on youth and education issues.

The debate will be moderated by Prof. Nelson Wiseman of the university's Department of Political Science.

Students and community members are being encouraged to attend and participate in the two-hour debate that begins at noon.

On Wednesday, McGuinty became the lone holdout for a debate in northern Ontario as the Progressive Conservatives accepted a challenge from the New Democrats to face off in a second debate.

Horwath had been pushing for a debate in the north for weeks, saying issues such as unemployment and the high cost of living in that area deserve their own turn in the spotlight.

She was the first to accept an invitation from the Northwestern Ontario Municipal Association to debate issues affecting the north on Sept. 23 in Thunder Bay.

Hudak went on the offensive with his promise to put Ontario's sex offenders registry online if he forms the next government.

"I would put public safety for our kids ahead of the right to privacy of child predators," he said.

To back McGuinty's claim, the Liberals distributed comments made by OPP Commissioner Chris Lewis saying disagrees with Hudak about making the registry public.

Horwath pledged, if elected, to create a jobs commissioner to look for alternatives when large-scale layoffs or plant shutdowns are announced.

Horwath made the promise outside a Ford plant in St. Thomas that shuts its doors Thursday, putting the last 1,200 employees out of work.