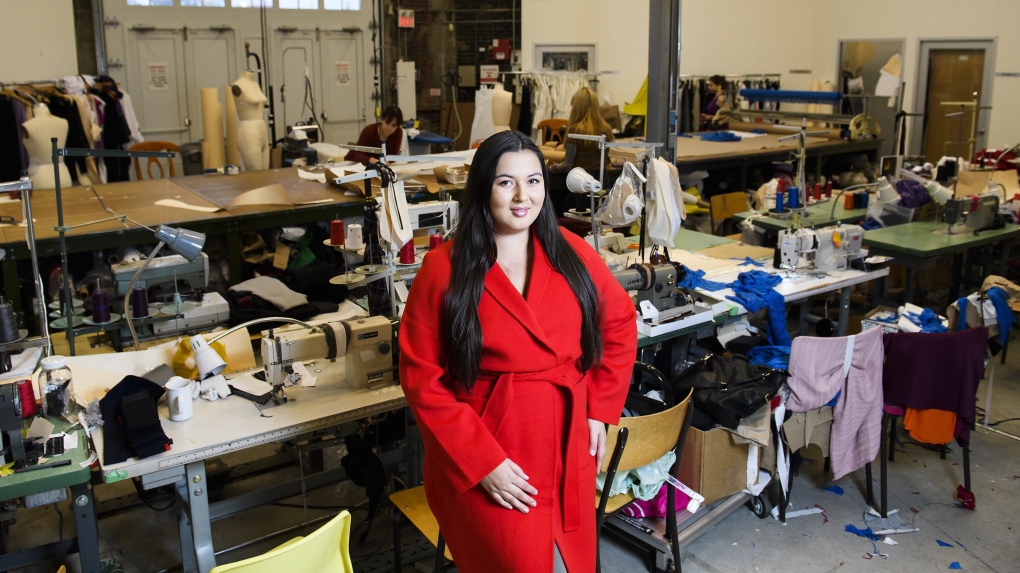 TORONTO -- Emerging designer Lesley Hampton has woven fashion with activism ever since she launched her brand three years ago.

That meant runway shows that championed body positivity, the importance of mental health and the value of diversity and inclusivity.

But missing was a core part of her identity as an Indigenous designer, and she says that's what takes centre stage with her debut at Toronto Fashion Week this week.

"There was always this gap that I was questioning and this collection really let me dive into how being Indigenous influences my design and influences my creation of work," Hampton says when reached at her Toronto studio as she attended to last-minute details for Wednesday's show.

"I grew up internationally and my mom was adopted so we didn't grow up kind of involved in the culture. I've been using my fashion design to reconnect with my roots and re-learn certain teachings and educational things that I didn't learn, didn't really know about growing up."

Hampton is part of Temagami First Nation but was born in St. John's, N.L., and grew up around the world -- stops included England, Australia, New Caledonia, and Indonesia, as well as Alberta and the Northwest Territories.

The 24-year-old began diving deeply into her Indigenous heritage last November when she attended a workshop for Indigenous entrepreneurial development, and started to focus on how her own fragmented family history has shaped her identity as a designer.

Hampton notes her own mother has struggled with this, too, and reconnected with her birth mother as she was growing up. Hampton is proud to now continue that journey by reclaiming more of their culture and language -- for both of them.

"Even down to learning how to say, 'Hello' in Ojibwe or Anishinaabemowin, little things like that that neither of us know but now I can attempt to say it to her is really exciting," she says.

It hasn't come without scrutiny, she admits, pointing to her own efforts to reconcile her mixed background.

"It's very much a colonial concept to ask myself: How Indigenous am I?' Or, 'Am I Indigenous enough to put on a collection like this, given the fact that I didn't grow up in the culture?"' says Hampton, whose father is of Scottish background.

Instead, Hampton says she incorporates historical references, such as the use of nude tulle that is embroidered with red dots to represent missing and murdered Indigenous women. Her show will also include accessories by Helen Oro Designs Inc. and Iskwew Rising, mukluks from Manitobah Mukluks and appliqued Indigenous beadwork by Roberta Anderson.

And all of her runway models identify as Indigenous, a goal that Hampton says was a challenge to achieve.

"We found that there was a lack of representation of Indigenous talent in Toronto within the agencies and just on the runway in general," she notes.

Hampton turned to friends and community connections to round out her roster, enlisting actress/model Jade Willoughby, as well as actress Tiio Horn and the 2015 Mrs. Universe, Ashley Callingbull. As in previous shows, she expects her models will be a range of sizes from 2 to 16.

Hampton's rise through the industry has been quick -- an early show for Vancouver Fashion Week just three months after starting her brand landed her in British Vogue. Another boost came when Kim Kardashian shared Hampton's fall/winter 2017 showcase on Facebook because it featured Boston-bombing victim Adrianne Haslet, an amputee with a prosthetic leg, as a runway model.

Hampton says it "would be a dream come true" to meet and work with any of the Kardashians. She'd also like to be a red carpet celebrity designer along the lines of her professional idol, Christian Siriano, a champion for plus-size fashion and diversity on the world stage.

Wherever her career takes her, activism and style will always go hand-in-hand.

"Because fashion is such a first step towards what clothes are put up, who wears what and what bodies are 'allowed' to wear what, I think it's a great platform to start with this messaging."