If you are a fan of the Kardashian brand, then the Hudson’s Bay flagship store at Queen Street West and Yonge Street was the place to be Wednesday evening and a wristband was your ticket to meet one member of the most famously branded families in the world.

Khloé Kardashian, the middle of five children of reality television’s Kardashian clan, arrived in Toronto along with her business partner Emma Grede to launch their clothing line “Good American” in Canada. 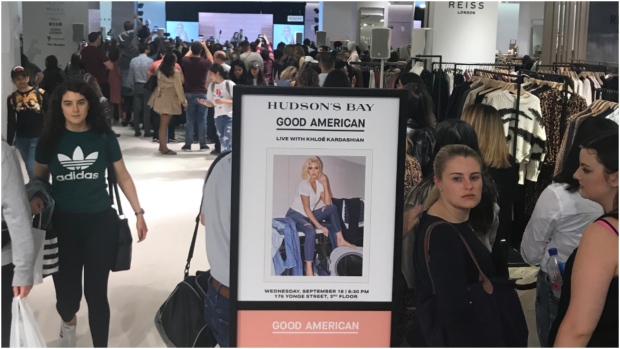 The wristbands were given to 65 lucky fans that had previously made a purchase of at least $200.00. But many more crowded the store to catch a glimpse of the currently blonde bombshell.

Friends Noah, 20 and Sevda, 26 each spent over $500 on merchandise in order to meet Kardashian.

They got two wristbands each, and while others offered to buy one of the sought after pieces of ribbon, they declined. Opting instead to go to the back of the line and “meet” Kardashian again. Asked if his parents were aware of his pricey purchases, Noah told CTV News Toronto, “They are now!” 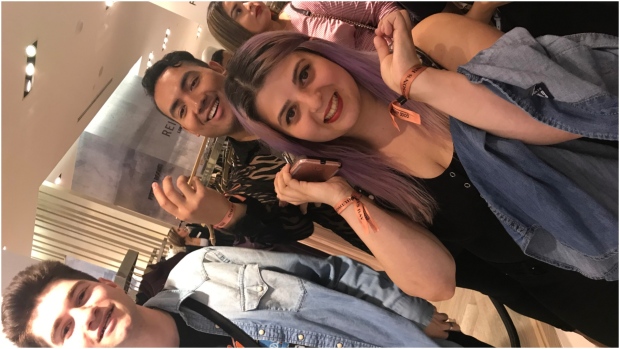 The clothing line features clothing for all shapes and sizes for women from size 00 (yes, there is such a thing) to size 24.

Previously, the line was only available on-line in Canada. It is so popular, when it launched in 2016, the company made one million dollars on day one, making it the biggest apparel launch in denim history.

Kardashian battled her weight for years, but in 2013, after a breakup with her husband Lamar Odom she says she transformed her body through diet and exercise.

She was successful in slimming down, calling her new look a “revenge body” and has turned that too into a lucrative business. But she has not forgotten her past, which is part of the reason the clothing line is so wide ranging. 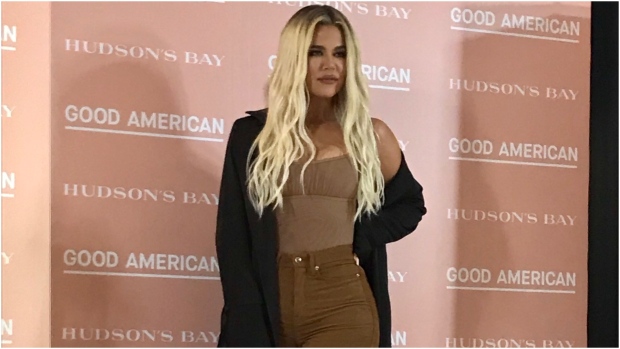 “Koko”, as she is called by family and friends, is familiar with Toronto and Canada. Her daughter, True Thompson’s father is Toronto-born basketball player Tristen Thompson.

The line prides itself on its being inclusive and women of all races and sizes are featured in their advertising. When the 35-year-old first announced that she was looking for “beautiful, powerful women” to join her in the campaign to launch “Good American’s” first product, blue jeans, real people were chosen.

The verdict from those who have written about them online: Great fit and big price tag. One pair can cost more than $200 Canadian.

Regardless, fans will pay to own a piece of the Kardashian brand. The jeans sold out and now the line has expanded to include suits, dresses, maternity wear and active wear. The accompanying website also offers lifestyle and beauty tips.

Kardashian is rumoured to be worth $40 million, but the company is committed to help those who otherwise could not afford to pay $200 for a pair of jeans. Money from every item sold is donated to “step up” an organization that “propels girls from under-resourced communities to fulfill their potential.”