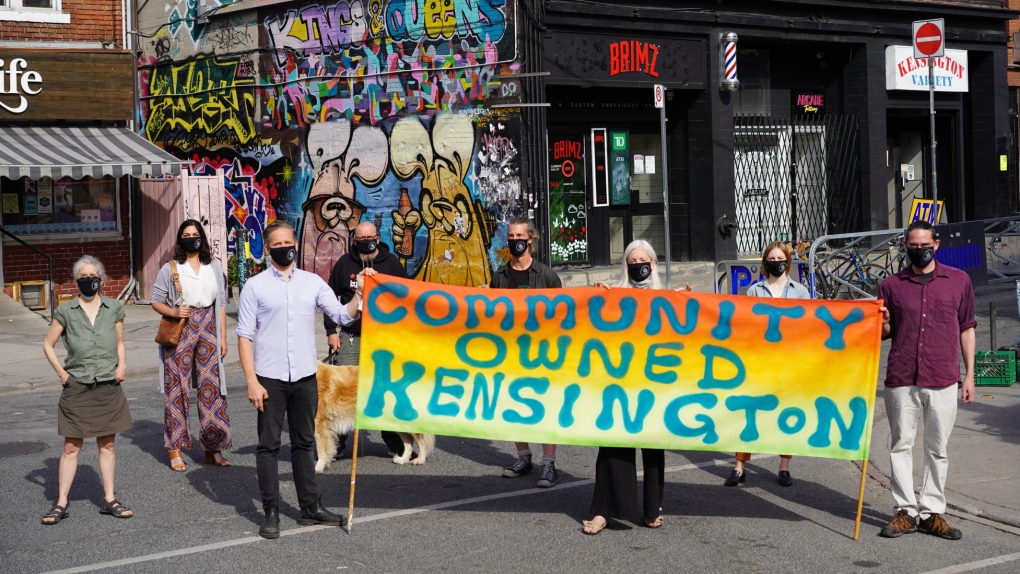 TORONTO -- A slice of Kensington Market is now in the community’s hands — for good.

The property is home to a variety store, a barbershop, a tattoo parlour and a hat shop, in addition to its residential upper half.

“54-56 has a lot of symbolic resonance for the community and the neighbourhood and people who come to this neighbourhood,” Dominique Russell of the KMCLT told CTV News Toronto.

Just two years ago, the tenants of the building faced renovictions, says Russell. She fought alongside City Councillor Mike Layton, MPP Jessica Bell and the Kensington-Bellwoods Legal Clinic, amongst others, to ensure tenants knew their rights.

In the end, tenants were able to remain in their homes.

“When we realized that 54-56 was on the market, we contacted [Layton] and said, ‘Can you help us get this building?’ Russell said.

“We’d been having conversations with KMCLT for some time about what their goal was. When the opportunity came forward, it was an excellent chance to protect affordable housing in the community,” Councillor Layton told CTV News Toronto,.

Layton brought the item to the city council, where it was seconded by Councillor Joe Cressy and passed, granting the trust $3M towards the acquisition.

“I was very happy to see it more forward,” Layton said, adding that he hopes this will help give KMCLT the means and assets to help grow their portfolio.

Executive Director of Housing Secretariat at City of Toronto, Abi Bond, was also glad to see the acquisition.

“The acquisition of this multi-tenant home, provides a critically important form of deeply affordable housing for low-income households, including vulnerable and marginalized groups, who may otherwise be at risk of homelessness,” Bond said.

“This project demonstrates the value of community land trusts and the City working together,” she continued.

Two years since the threat of evictions hung over tenants’ heads, 54-56 now belongs to the community — and the trust doesn’t have any plans to stop there.

“We’re interested in protecting as much as we can of the neighbourhood,” Russell said, adding that the KMCLT’s timeline is “in perpetuity” and the project is very much a long-term one.

“The emphasis is really, on the one hand, keeping the neighbourhood vibrant, [..] keeping it diverse and keeping it accessible to everyone. The idea as well of just holding in common, giving ourselves some say in what happens in our neighbourhood, and helping our neighbours have some stability,” she added.

To continue their work, KMCLT has started a GoFundMe, hoping to raise a total of $50,000 — at the time of publication, just over $6,400 had been donated.

The funds will go towards ensuring the permanent affordability of 54-56 Kensington and pursuing further acquisitions in the Market, says the group.

Russell says that this victory — and any future success they see — is dedicated to the tenants of 54-56 Kensington Avenue.

“The victory of being able to buy the building is really in connection to my gratitude of the tenants who could withstand that pressure. I hope it gives some optimism in what is generally not a very optimistic picture for renters in Toronto.”