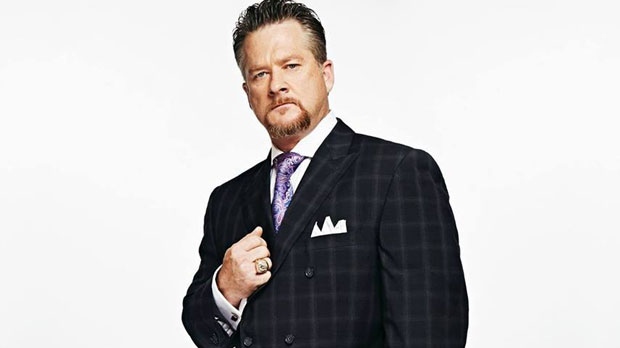 Gregg Zaun is seen in this undated photo. (Facebook)

TORONTO -- The medium has changed but Joe Siddall's approach won't.

Sportsnet announced Wednesday that Siddall, a former major-league catcher, will join the Toronto Blue Jays Central broadcast as a studio analyst. Siddall, 50, of Windsor, Ont., will work alongside host Jamie Campbell for pre- and post-game coverage of the Jays and is scheduled to make his debut March 26.

Siddall takes over from Gregg Zaun, who was fired in December following complaints by female colleagues of inappropriate behaviour and language. Zaun, also a former major-league catcher, later apologized in a statement released by his lawyer for "the harm caused by my language."

Zaun was a colourful personality on television, often criticizing the Blue Jays, but Siddall said he's not going to change his approach.

"I'm going to be Joe Siddall," he said. "The one thing I really believe in is being yourself and that's what I am going to be.

"I won't change the way I did it on the radio broadcasts and I was fortunate to sidle over and fill in on TV my first four seasons. I think all that experience has helped me immeasurably to land this and I look forward to doing much of the same."

Siddall began his major league career with the Montreal Expos in 1993. He made 78 appearances between 1993 and 1998 with Montreal, Florida and Detroit, posting a .169 batting average with one home run and 11 runs-batted in.

Siddall said his time behind the plate gave him a more complete perspective about the game of baseball.

"Because I'm a former catcher, on my broadcasts in the past I've tended to focus a lot not only on the catching position but also the pitcher-catcher relationship," he said. "I loved talking throughout the broadcast on pitch sequencing: for example, when a pitcher misses down and away with a slider there's a good chance he may come back and work a fastball or if Marco Estrada elevates a fastball, here comes the changeup down and explaining to the audience why you do those things and how he (pitcher) accomplished what he just did.

"And not just focusing on the catching position but on the whole field and I think that's one benefit as a former catcher that you have. People say catchers make good analysts and I think it's because the game is in front . . . everything that's happening is in front of you and you're into every pitch of every game and I think that was one of my strengths throughout my career."

Thanks in large part to playing for Felipe Alou, both in the minors as well as during Alou's tenure as Expos manager.

"I always refer to Felipe because he taught me a lot of the intricacies of the game," Siddall said. "I feel as a catcher you're the extended manager out on the field and I think that's what Felipe referred to me as.

"I think it's very true because you're on the field actually calling the shots and have an impact on every play because you're putting the signs down."

During his tenure on Blue Jays radio broadcasts, Siddall worked with legendary announcer Jerry Howarth, who earlier this month retired after 36 seasons due to health issues affecting his voice in recent years.

And when Siddall moved over to television, his partner in the booth was none other than veteran play-by-play man Buck Martinez, coincidentally a former Jays catcher.

"I knew when I started I felt very comfortable with my knowledge and insight to the game," Siddall said. "But becoming a broadcaster is an entirely different thing now, actually articulating your thoughts and expressing them to your audience.

"On radio you're being more descriptive while on TV they have the pictures so you don't have to be as descriptive but now you can help utilize the pictures to show your audience what you're trying to explain or talk about. With Jerry Howarth and Buck Martinez, I had two fine gentlemen guiding me along and helping me to become a broadcaster."

On Wednesday, Zaun announced on Twitter he's starting a new show on YouTube called Manalyst TV, describing it as "untethered by the constraints of network cable television." The first episode is slated for Thursday night.