'It gives permission for people to be positive and silly': Silly walk spots springing up across the GTA

TORONTO -- It's a sign that you can still have some fun, even in the midst of a pandemic.

On the front lawn of Cynda Fleming's Toronto home, are two small signs, welcoming those walking by, to the “jurisdiction of silly walks.”

It's an idea Fleming said she first saw online and decided to bring to her own neighbourhood.

"I thought I could set up my own branch here in Leaside, so I did! Just for fun,” she told CTV News Toronto on Tuesday.

Inspired by the classic 1970 Monty Python sketch “The Ministry of Silly Walks,” Fleming's signs encourage passersby to let loose as they pass her property. She put the signs up a few weeks ago and says "people are really having a good time with it."

"The very day I put them out, people started embracing the idea of doing a silly walk in this little zone here. It was quite amazing."

Now, it's become a source of amusement she says is "better than Netflix".

From her front window she watches as neighbours pass by and, for the few metres they are in front of her property, let loose.

"It's everything from just a smile and a recognizing of Python, and you know, that idea of that absurd humour of Python. And then there are actually people who dedicate bike rides to this spot, do the silly walk, and then get back on their bikes and head on their way."

Fleming, who says she's been a Python fan since high school, says she wanted to do something to raise the spirits of her neighbours. "I just wanted to do this to bring some positivity into this crazy situation we're in right now and it just, I think, gives permission for people to be positive and silly."

Many of those who've taken up the directive to be silly, aren't even old enough to know of Monty Python or the original sketch. 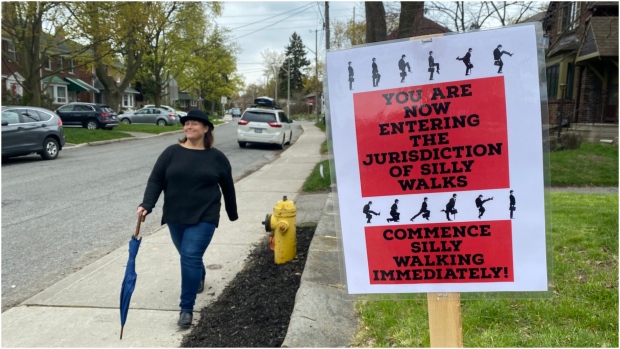 "The other day I had a family come, and the family said 'it's sleep walking' and they did sleep walks. And I said ‘well that's not the right ministry, but we'll let it go.’”

The silly walk signs have been popping up all over the globe and there are several others that have sprung up in Toronto. An idea Fleming says is "timeless.”

“It's just about making fun of yourself and not taking yourself too seriously, which I think we need. We need that all the time, but we need that especially right now."