Is an amped up social media push affecting the Ont. election campaign? 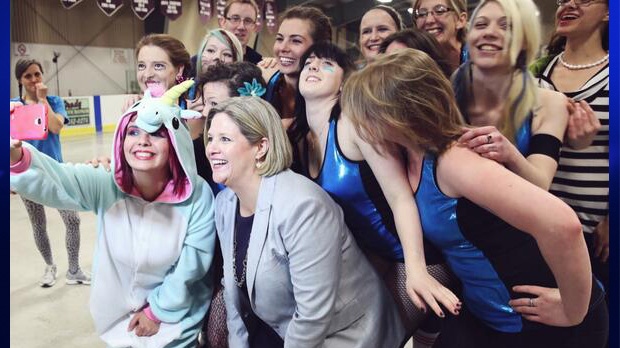 "But now they have to shake hands and kiss babies and tweet. It's part of the mix."

Each leader and their party certainly seem to be trying hard to be present on a variety of online platforms -- all are on Twitter, Facebook and YouTube to push out their messages ahead of the June 12 election.

In new developments this campaign, the Liberals and the New Democrats have also created accounts for their leaders on the popular photo-sharing platform Instagram, and the Progressive Conservatives have started a "campaign update" video in which they respond to the dominant issues of the week.

The impact of those efforts remains to be seen, said Blevis.

"But as far as an election communication and engagement tool goes, social media channels are very important ... If you're not putting something out on a regular basis that brings your ideas, your opinions to light, then you're missing out on an opportunity to reach people."

The increased exposure on all fronts also means more potential pitfalls for the politicians.

Premier Kathleen Wynne had to take time out from touting her policies last week to defend her party's vetting process after the Progressive Conservatives and the NDP dug up what they called "sexist" Facebook and Twitter posts from three Liberal candidates.

The episode highlighted the potential for social media to be used as both a positive and negative tool, said Blevis.

"This thing is still evolving, and it will always evolve, but politics is not being done as usual anymore," he said.

Despite the potential problems, all three major parties in the election have said they're doing more in terms of online outreach during this campaign than ever before.

"We see it as an extension of our message that we have historically conducted through traditional methods of media," said Liberal campaign spokeswoman Rebecca MacKenzie. "The audience that we're able to reach and engage with is just multiplied by an incredible amount."

In addition to broadcasting their party talking points, the Liberals have also been using tools such as Twitter and Instagram to showcase their leader's more personal side.

"It's a way for people to see the real premier," said MacKenzie, who noted that Wynne's Twitter account has been used to engage with some supporters through personal replies.

It all amounts to an added push to get voters to cast their ballots.

"Many social media strategies are about engagement. I think in a political campaign we go beyond that because we're also helping to motivate people to get to the polls," said MacKenzie.

The NDP has the same goal in its online efforts.

"It comes down to having a very strong election day turnout for New Democrats," said communications director Jen Hassum. "What we aim to do is to link social media engagement to the ground-level field organization."

The NDP launched a new website in the second week of the campaign that integrates the party's Facebook, Twitter and YouTube accounts and also acts as a database that will help track supporters, donors and volunteers in what the party calls its most "data-driven campaign."

The site, which forms the centre of the NDP's new digital platform, was modelled on the successful online organizing of Barack Obama's election campaigns in the U.S. and built with the help of an American company.

"I think that campaigns need to engage people where they're at. If people are online and if they're using social media then we need to be getting our positive message of change out there," Hassum said, adding that the party monitors feedback to its online posts carefully.

Meanwhile, the Progressive Conservatives, who were far more secretive about what they hope to achieve through their social media strategy, said this campaign marked what they believed to be "the largest online advertising buy of any Ontario political party in history."

"I think we're being smarter and more sophisticated about it," campaign media director Will Stewart said about the party's social media game plan this campaign as compared to the province's last election in 2011.

But how many of Ontario's 9.2 million eligible voters are paying attention to these online efforts?

It's hard to tell, said University of Guelph professor Tamara Small, who specializes in digital politics.

"Politics is different because of the Internet. It has changed politicians and how they do the job, it has changed access to politicians," she said. "What we don't know is how much it matters in the end."

The reason for the uncertainty is because those who pay attention to political parties' tweets, Facebook posts or YouTube videos are often those who are politically engaged to some extent anyway, Small explained.

"I don't think it matters more than anything else -- it's part of the arsenal. It's like lawn signs. It's like ads you put in the newspaper."