How Ontario's largest school board plans to return in September 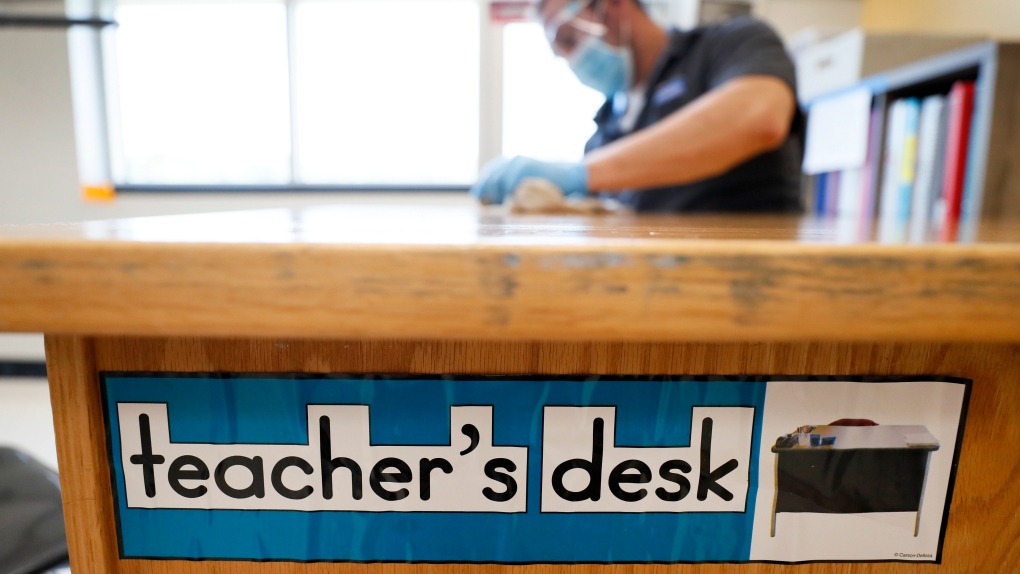 While school boards across Canada are quietly developing plans for bringing students back to class in September, the largest such organization in the country has taken things one step further by laying out a variety of scenarios in stark, costly detail. (The Canadian Press)

TORONTO -- While school boards across Canada are quietly developing plans for bringing students back to class in September, the largest such organization in the country has taken things one step further by laying out a variety of scenarios in stark, costly detail.

Some of the models under consideration at the Toronto District School Board involve changing the way certain subjects are taught, while others raise public health and safety concerns among industry observers who fear COVID-19 will continue to present an imminent threat in the months ahead.

Here's a look at how things could play out for Toronto students and parents in the fall:

What has the provincial government requested?

The Ministry of Education has asked all 72 of Ontario's school boards to prepare plans for three possible scenarios -- a full-time return to in-person learning, virtual classes for all, or a hybrid model that combines the two.

Boards must submit plans for all scenarios by early August, which will then be subject to government approval before they can be implemented. Education Minister Stephen Lecce originally said hybrid learning was the government's preference, but has since indicated a preference to see all students back in class full-time.

So how is the Toronto board planning to comply with the province's preference?

Officials have mapped out different models for each of the three scenarios required by the government, board spokesman Ryan Bird said in an interview. The most complex of these, he said, come about when considering a full-time return to classroom learning for students between kindergarten and Grade 8. And each of them comes with a price tag, some heftier than others.

Option 1: Regular-length school days with no more than 15 students per class across the board. Bird says this option would cost the most, with the board needing $249 million to hire about 2,500 extra teachers. Bird described this approach as "not that financially feasible."

Option 2: Same class sizes, but with the school day shortened by 48 minutes to allow teachers to have some prep time at the end of the day. Bird said this model would lower the cost to $98 million.

Option 3: A full-day model with two different sizes of class cohorts -- a maximum of 15 for students in kindergarten to Grade 3 and cohorts of 20 for Grade 4 and up. Bird estimates the board would need to hire 1,900 teachers at a cost of $190 million if this plan goes ahead.

Option 4: Same mixed class sizes, but with the school day shortened by 48 minutes. Bird pegs the cost of hiring 200 teachers to support this approach at about $20 million.

Option 5: Resuming pre-pandemic class sizes, but with additional, unspecified health and safety protocols. Bird said this approach is the one the board currently favours.

"We want all of our students back, and if we can do it in regular class sizes, we think that is ideal just from a mental health and well-being and learning aspect," he said. "Having said that, we know that the health and safety of our students and staff is the number one priority, so we have to make sure that whatever option is implemented ... is safe to do so."

Assuming the government approves something other than Option 5, does that mean classes will be taught as usual but in smaller numbers?

No. Bird said several subjects will have to be delivered differently than they were prior to the COVID-19 pandemic. Chief among these is French, he said, noting there aren't currently enough qualified teachers to staff a higher number of smaller classes. But that doesn't mean the course would disappear, he stressed, noting the board is looking at options such as virtual lessons delivered to in-person classes. The same principles apply to courses such as music, art and physical education, he said.

What do the experts think?

Charles Pascal, a former Ontario deputy minister of education and current professor at the University of Toronto's Ontario Institute for Studies in Education, praised the board for laying out their proposals and projections for public discussion. But he said none of the ideas currently on the table strike him as wise, noting school buildings and staffing levels will make it difficult to implement the models that are most closely aligned with public health protocols such as physical distancing and small indoor gatherings.

He said the province should have directed school boards to start contemplating these issues months ago, adding doing so would have allowed them more time to be creative and even apply models tailored to individual schools rather than one-size-fits-all solutions.

Pascal said the Toronto board projections clearly demonstrate the need for significantly higher government funding, a view shared by the head of a labour group representing the city's elementary school teachers.

Jennifer Brown, president of the local chapter of the Elementary Teachers Federation of Ontario, said every proposal comes with obvious drawbacks. But she said she would personally support the one that best protects students and staff alike, even if it means shifting courses like French to virtual models that are generally less effective.

"There's shields up at banks, grocery stores, any service area," Brown said. "With our youngest and most vulnerable, we don't seem to have that same type of intentionality when it comes to safety. Yes, children are resilient and we're sending them in healthy. I want to ensure that everybody's getting sent home healthy as well."

The Ontario Ministry of Education declined to comment on the Toronto board's specific projections, but said the organization would be receiving $55 million in additional funding.

What about high schools?

Bird said the board is currently focusing on a hybrid model, noting student numbers at some schools will make a return to pre-pandemic norms all but impossible.

"We have some high schools with up to 1,800 students. So to have that many students in the building at the same time was the reason we looked at the cohort model," he said.

One approach under consideration, he said, would see the high-school academic year divided into "quadmesters" or four sections of two courses apiece. Such a model, he said, would limit movement throughout school buildings and make it easier to trace contacts if COVID-19 cases crop up in classrooms.

This report by The Canadian Press was first published July 19, 2020.