TORONTO -- A portion of Highway 400 has reopened after blustery winter weather caused a pile-up involving up to 50 vehicles and six transport trucks Thursday afternoon.

“Multiple vehicles have been involved in crashes, at least 20 vehicles in one pileup,” he said.

“Other vehicles have spun out of control. We have several jackknifed transport-trucks and other issues that are blocking the highways. Heavy tows, light-duty tows are all assisting right now, trying to get these vehicles off the highway.” 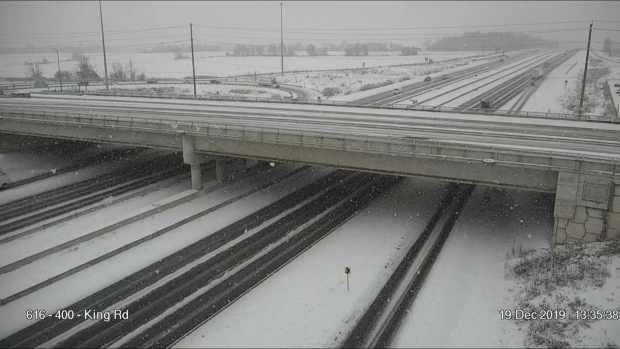 Schmidt said that there are no reports of any serious injuries.

#Hwy400 reopened between Hwy88 and IBR after approx 50 vehicles and about 6 transport trucks involved in collisions. Fortunately no reports of injuries #SeeSnowGoSlow pic.twitter.com/8FbRSefCFL

The flurries are also causing problems on the Queen Elizabeth Way (QEW) as well, with at least one collision near St. Catherines.

In a video posted to Twitter, Schmidt said one motorist was injured as a result of a vehicle collision on the Garden City Skyway.

“As one of the motorists got out, they were actually struck by another vehicle trying to go by,” Schmidt said.

Shmidt added that he does not believe that the injuries in that incident are life-threatening. 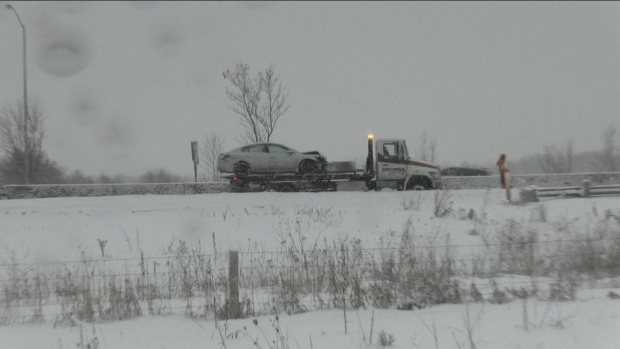