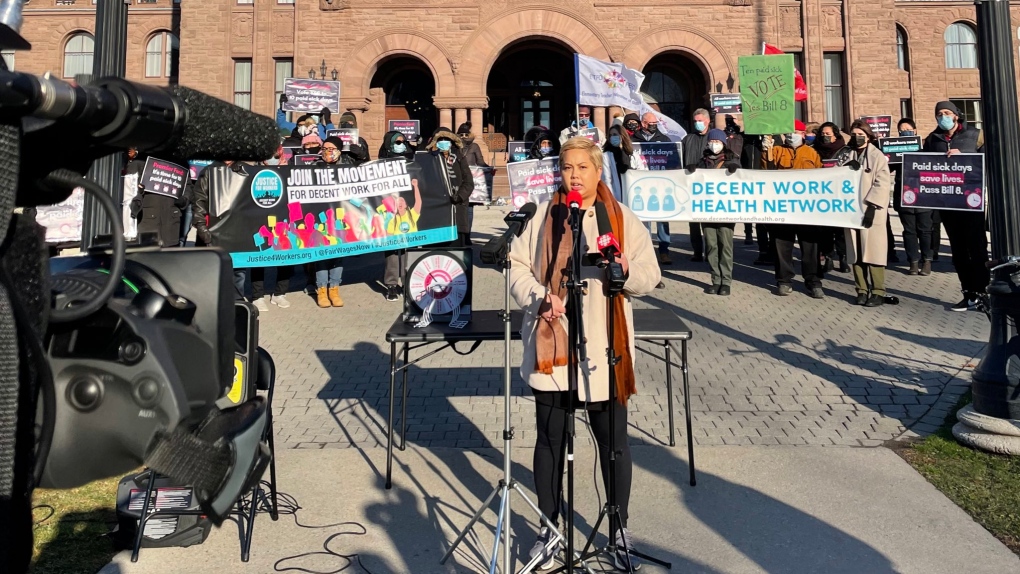 Frontline workers and supporters gathered in front of Queen’s Park in Toronto on Monday morning to call on the Ford government to vote in favour of Bill 8, which aims to provide 10 paid sick days and 14 additional days to frontline workers during public health emergencies.

The Bill, which saw its first reading on Oct. 6, is expected to be voted on in the legislature this week.

Ontario’s current paid sick leave program, introduced in late April, requires employers to provide employees with up to $200 of pay for up to three days if they have to miss work because of COVID-19. This program is set to expire on Dec. 31.

“This government’s three temporary paid sick days are completely inadequate and are set to end in the dead of winter when diseases can spread more quickly,” Dr. Naheed Dosani, a palliative care physician and member of the Decent Work and Health Network (DWHN), said in a statement issued Monday.

“We need to learn the lessons of the first waves of the pandemic. It’s past time for permanent legislation that protects our patients with at least 10 paid sick days.”

According to DWHN, Premier Ford was invited to attend the gathering but declined the invitation. Ford was in Orillia today to announce an expansion to the Second Career Program, which provides financial support to laid-off and unemployed workers.

“[It was] so powerful hearing from the people in this province paid sick days would help most,” Jill Andrew, MPP for Toronto-St. Paul's, said on Twitter after attending the event.

“Those on the frontline who lifted our province up from the worst of the pandemic. They deserve the same in return,” she said. 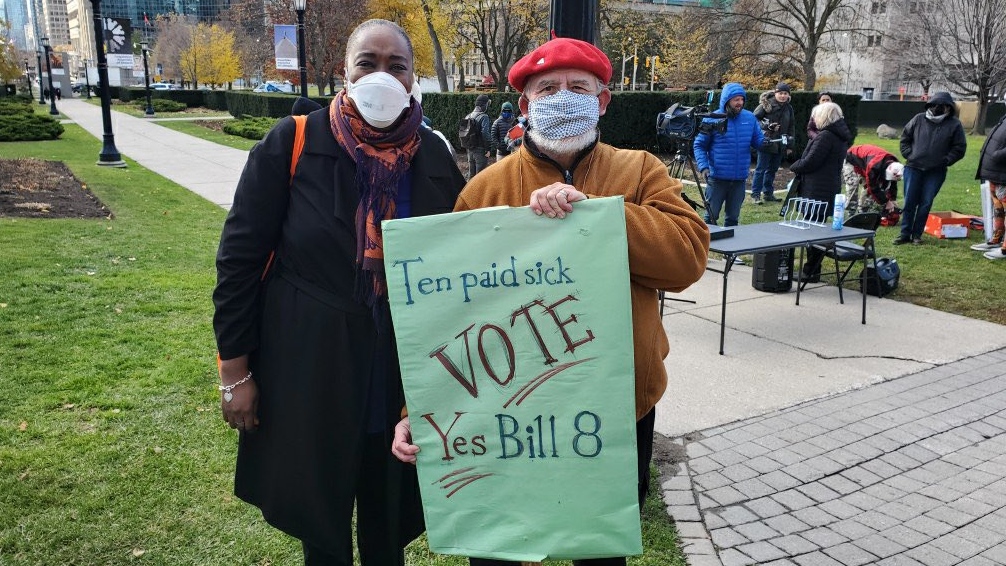 The Ford government faced criticism from both opposition parties and health experts for failing to mandate paid sick leave sooner in the pandemic.

Ontario’s COVID-19 science table also criticized the current program, claiming that it did not go far enough and that something closer to 10 days would be more appropriate.

When asked by reporters days after the implementation of the plan whether the government’s program would be enough to lead to a pandemic best-case scenario in Ontario, Science Table Co-Chair Dr. Adalsteinn Brown replied simply by saying, “No.”

Representatives from DWHN are echoing that statement, highlighting that the Ford government has voted ‘no’ at least 25 times on proposed paid sick day legislation.

“[Ford’s] government has voted against paid sick leave over 25 times,” DWHN said in its release.