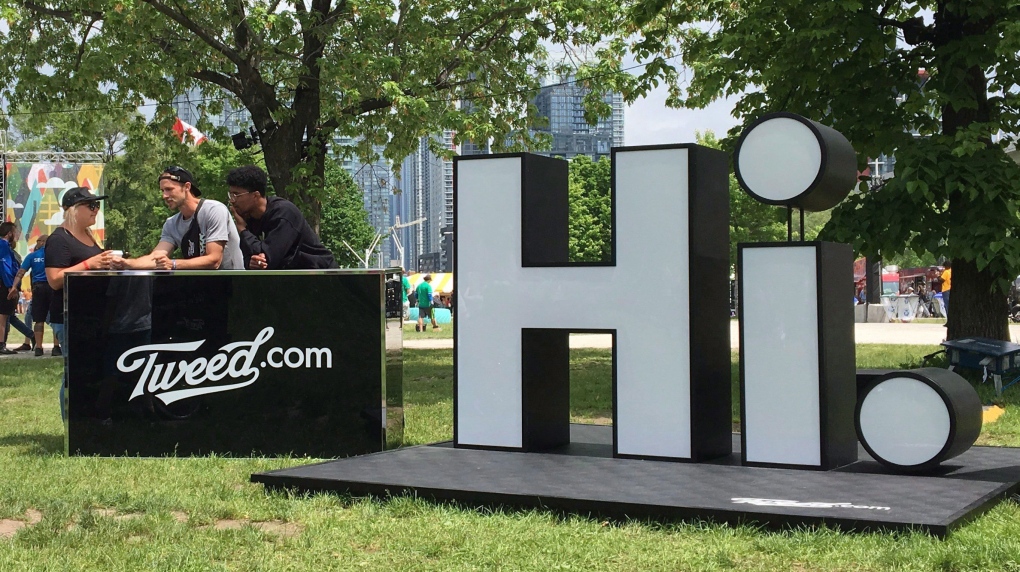 Representatives for Tweed Inc., a licenced producer of cannabis, mingle with concertgoers at the Field Trip music festival in Toronto on Sunday, June 3, 2018. THE CANADIAN PRESS/David Friend

Health Canada said Friday it's prepared to crack down on licensed medical marijuana producers who are sponsoring music festivals and other events.

The federal department said it's "concerned" about some companies that have engaged in corporate sponsorships and other promotional activities that go against the Cannabis Act.

It said the government has made it "abundantly clear" what isn't permitted under the laws, such as marketing to minors.

Health Canada issued a statement noting that cannabis companies have been dabbling in various forms of marketing that raise red flags, although it highlighted music festivals as a particular point of concern.

Tweed, a brand owned by Canopy Growth Corp., is among the companies that have been sponsoring events, including the Field Trip music festival and Pride Toronto this summer.

The company's spokeswoman, Caitlin O'Hara, wrote in an emailed statement that Canopy is focused on education and responsible use of its product.

"We have reviewed all activities with counsel to ensure compliance and continue to work collaboratively with regulators in support of this shared objective," she said.

Aurora Cannabis is another producer has taken a prominent sponsorship role at various Canadian events, including the North By Northeast music festival in June. Representatives for the company declined to comment on Friday.

Eileen McMahon, a partner at Torys LLP who leads the drug and regulatory practice, said Health Canada's warning doesn't come as much of a surprise, since the cannabis market is experimenting ahead of legalization on Oct. 17.

She said many companies are attempting to get their brand names into public consciousness before they expect regulations to be enforced.

"This is an opportunity where companies say, 'What is legal and illegal under current law? What is grey and in the grey area? And can we play there in a way that's defensible?"' she said.

"Some companies will take some risks ... others won't. I think you see that activity taking place and the government's reaction."

While Health Canada didn't directly acknowledge companies it deemed offenders, it said the actions have underscored a need for "rigorous enforcement" of the laws.

"The department is reviewing the actions of existing licensed producers and will be taking every possible step to bring them into compliance or prevent non-compliance with existing laws," it said.

"Those who do not adhere to the applicable prohibitions will face serious consequences, which may include, if appropriate, suspension of their licence."