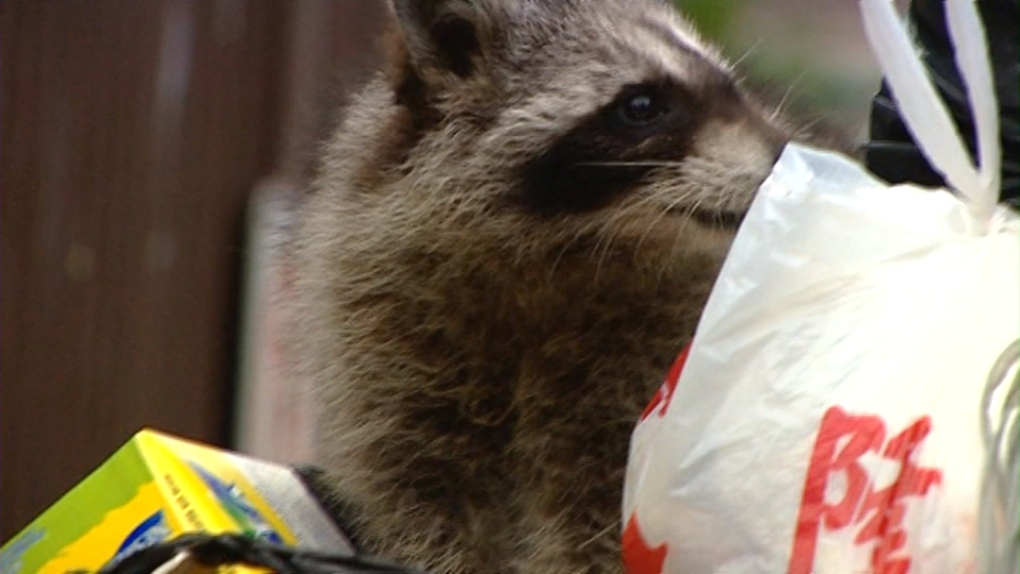 A fight between two Ontario dogs and an aggressive raccoon in the back of an animal control van has led to the discovery of the first documented case of rabies in a raccoon in the province in nearly a decade.

The City of Hamilton says it is "increasingly vigilant" and is urging "the public to contact Hamilton Animal Services if they see any distemperament in wildlife," according to spokeswoman Ann Lamanes.

The city is also reviewing its animal services protocols in the wake of the incident.

According to the Canadian Food Inspection Agency, it's the first documented case of rabies in a raccoon since 2006 in Ontario, although there have been two dozen in other provinces this year, mostly New Brunswick.

Toronto, the country's largest city, grapples with a large urban raccoon population and is about 70 kilometres east of Hamilton. Ontario instituted rabies control programs more than 20 years ago, and in the summer of 2015 distributed 100,000 baits containing rabies vaccine.

The vaccine is aimed at keeping raccoons in the province rabies-free by immunizing the animals in border areas due to the presence of raccoon rabies near the Ontario-New York State border. Provincial officials say the flavoured baits immunize most skunks, foxes and raccoons that eat them.

Part of the fight between the bull mastiffs and the rabid raccoon was captured on video and uploaded to Facebook by Paula Fancey, the owner of the dogs. The animals were picked up by animal services workers after they broke free from her property on Wednesday.

Fancey and her daughter, Jordan, got into a heated argument with the animal control officer, each claiming the other started it.

They also don't agree on how the animal fight began, with Fancey saying the raccoon got loose first, prompting one of her dogs, Mr. Satan, to break out of his cage and fight the raccoon.

City spokeswoman Ann Lamanes says one of the dogs got out of the cage and attacked the "aggressive raccoon," which fought back, cutting the dog's mouth and tongue.

Fancey said the animal control officer re-captured the raccoon and put it in a cage next to their other dog, Lexus.

"Then the raccoon reached through the cage and bit her," she said.

Fancey broke down Friday after learning the raccoon, who was later euthanized, tested positive for rabies.

"I don't know what I'm going to do," she said through tears, adding that her dogs were not up-to-date on their vaccinations.

Later, after speaking with her veterinarian, she said she was likely going to euthanize the dogs.

"It's not worth the risk," she said. "We have kids and we can't keep them quarantined for months, we just can't."

Fancey said her three children, aged 13 to 21, have been weeping since hearing the news Friday afternoon. She added the situation should have never happened in the first place.

"It's our fault that the dogs got loose and broke through the gate, but why were they in the animal control van with a raccoon?" she said. "And why do they use those cages?They're flimsy and not secure."

Lamanes, meantime, said there's been a heightened risk of aggressive raccoons in Hamilton.

"It was very vicious and it was a public safety risk and we weren't going to let it back into the wild, so it was euthanized."

She added the city is reviewing several issues that were highlighted by the incident, notably the strength and condition of the cages used in their vans and whether domestic animals should be transported at the same time as sick or injured wildlife.

A veterinary pathologist with the Canadian Wildlife Health Co-operative called the discovery of rabies in the raccoon disturbing.

"At this point it's extremely rare and quite concerning," said Douglas Campbell, adding it's the first time rabies in raccoons have ever been reported in the Hamilton or Niagara areas before.

It's unclear what strain of the virus the raccoon contracted, and that will determine the province's response, he added. Raccoons can contract bat rabies, for example.

"The theory is you provide a barrier of vaccinated animals so that (if) a raccoon strays across the Niagara River or across the St. Lawrence River, even if it contacts other raccoons in the area, it won't set off an epidemic of the disease because you've got protected animals," he said.

"So if you get an animal that pops up in Hamilton -- if it turns out it's a raccoon strain, that means that it's jumped the barrier."