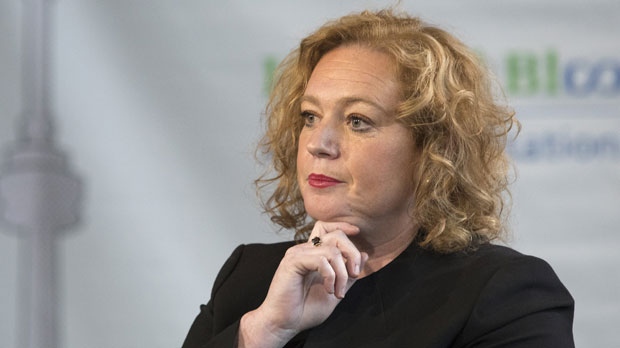 Lisa MacLeod Ontario's Minister of Children, Community and Social Services, looks on during an announcement in Toronto, on Wednesday, February 6, 2019. THE CANADIAN PRESS/Chris Young

TORONTO -- Ontario's minister in charge of the recently revamped autism program told an association of behaviour analysts that it would be a long four years for them if they did not publicly support the changes, the group said Wednesday.

The Ontario Association for Behaviour Analysis said in a note to members that Children, Community and Social Services Minister Lisa MacLeod and her staff requested a quote of support a few days before the new program was announced.

The association said the minister made the request without providing full details of the new program -- which they say will leave many children without the level of therapy they need.

"(They) indicated that failure to do so would result in 'four long years' for the organization," the association said. "The minister also indicated that if a quote of support was not forthcoming, a communication that behaviour analysts are 'self-interested' would be released from her office."

MacLeod's office said its priority is supporting families of children and youth with autism.

"Despite collaborative dialogues that took place over six months of consultation, ONTABA was unwavering in their desire to self-regulate and unwilling to work with government to open up the sector to provide parents more choice in support services for children with autism," spokesman Derek Rowland said in a statement.

"We remain committed to working with all stakeholders who are dedicated to clearing the waitlist and empowering parents to make decisions that are in the best interest of their family and children with autism."

MacLeod announced last week that in order to clear a backlog of 23,000 children waiting for publicly funded autism therapy, families will get up to $140,000 to pay for treatment, though funding will be subject to annual caps that families and advocates say will fall far short of what's needed for intensive therapy.

The funding is dependent on age, rather than individual needs for varying levels of intensity. Families will receive a maximum of $140,000 for a child in treatment from the ages of two to 18, also dependent on family income, but advocates say intensive therapy can cost up to $80,000 per year.

The premier's office distributed a selection of positive quotes about the new program shortly after it was announced, including from the Holland Bloorview Kids Rehabilitation Hospital, the Children's Hospital of Eastern Ontario and parents.

MacLeod also reportedly told the Waterloo Region Record that Autism Ontario was among the organizations that supported her plan, but the group said that wasn't true.

"Autism Ontario neither proposed nor endorsed the announced changes to the (Ontario Autism Program) and is concerned about the impact these changes will have on children and families accessing the program," it said in a statement.

The president-elect of the Ontario Association for Behaviour Analysis said when her group met with government officials ahead of the policy announcement, they were disappointed in the tone.

"Our meeting with the minister's staff and the minister was prescriptive in nature, basically letting us know the direction of the changes," said Kendra Thomson. "We were expecting more of a collaborative consultation process, given the gravity of the file."

The Ontario Autism Coalition has also slammed the new program, warning that it will fight it, noting their protests in 2016 against the then-Liberal government were successful in getting a policy reversed.

Former president Bruce McIntosh resigned from his post as a staffer for MacLeod's parliamentary assistant in response to the new autism plan, a move MacLeod's chief of staff Tim Porter dismissed on Twitter as a "political stunt by a professional protester."

When asked if she thought of the coalition as professional protesters, MacLeod said, "one could take a look at their logo and take a guess." The logo is of a raised fist.

Ontario Green party Leader Mike Schreiner said no amount of "bullying" could hide what he called serious flaws in the government's autism policy.

"It is wrong for any government ministry to threaten and bully professional organizations to endorse government policy," Schreiner said in a statement.

The Opposition New Democrats also lashed out at MacLeod, with the party's critic for children and youth calling the minister's alleged behaviour "absolutely shameful."

"Targeting caring professionals who are advocating for children with autism is disturbing," Monique Taylor said in a statement Wednesday evening.