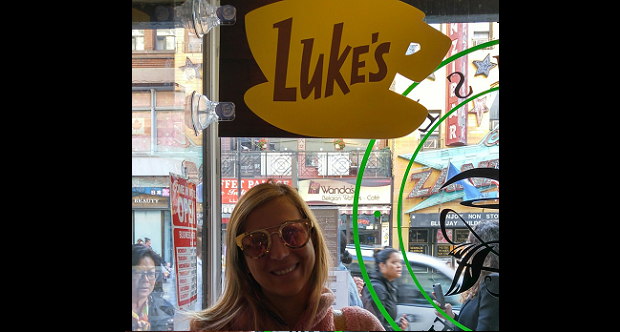 'Gilmore Girls' fan Magdalena Celedon said she waited in line for about an hour to an hour and a half to get some coffee from the Luke's Diner pop-up shop at Infuse Cafe on Yonge Street. (Magdalena Celedon)

Fans of the television series ‘Gilmore Girls’ were able to get a taste for what it’s like to grab a coffee at a diner featured on the show.

Four cafes across Toronto were transformed into Luke’s Diner from 7 a.m. until noon today, with the official yellow and red sign, 250 coffee sleeves with the diner logo and gear from ‘Gilmore Girls.’

The show, which first debuted in 2000 and ended in 2007, is making a comeback on Netflix with a reboot in November. The online streaming company decided to open 250 pop-up shops across North America to promote the upcoming season.

“Netflix U.S. called me late last week. They said they were doing this in the States and they wanted to introduce some Canadian options. I said yes right away,” said Vanessa Baudanza, co-owner of The Rolling Pin bakery on Yonge Street. “The next day I got all this packaged stuff. They sent me one sign and 250 coffee sleeves.”

Many customers arrived to line up today around 5:30 a.m. at the cafe’s Yonge Street and Lawrence Avenue location, she said.

The cafe, which usually starts serving customers at 10 a.m., opened up earlier than usual.

“”When we got here, people were already lined up,” said Baudanza. Less than two hours later, by 8:45 a.m., the cafe was out of coffee sleeves with the Luke’s Diner logo.

“I got there just past 7 a.m.,” said longtime fan and Toronto resident Magdalena Celedon, who waited in line at Infuse Café at Yonge and Gerrard streets. “There was already a huge line that went around the corner. I waited in line for like an hour, an hour and a half tops.”

Celedon, who is originally from Chile, said she started watching the show when it came out in 2000. Her sister, who still lives in South America, sent her a link online telling Celedon about the pop-ups in Toronto.

“These things don’t happen (in Chile), so I kind of did it for my sisters and all of us that are fans of the show,” she said.

Despite the long wait, she said it was “really cool.” Once inside the pop-up diner, she said she got a paper coffee cup with a quote written on it from one of the show’s main characters, Lorelai Gilmore, played by actor Lauren Graham.

“(The quote was) from episode two season one: ‘This is a jumbo coffee morning. I need a coffee in an I.V. drip,” Celedon said. “I was kind of hoping there was some merchandise, but they did announce on their Facebook there would be no merchandise.”

T-shirts and hats with logos were only given to staff at the cafe, Baudanza said.

“Lots of people approached me to buy my shirt,” she told CTV Toronto. “But everyone was very happy. They were excited, having a great time celebrating coffee and ‘Gilmore Girls.’”

Other locations that were open until noon today for the pop-up diner included Milano Espresso Bar on Adelaide Street West and another Infuse Cafe location at Gerrard Square Mall.