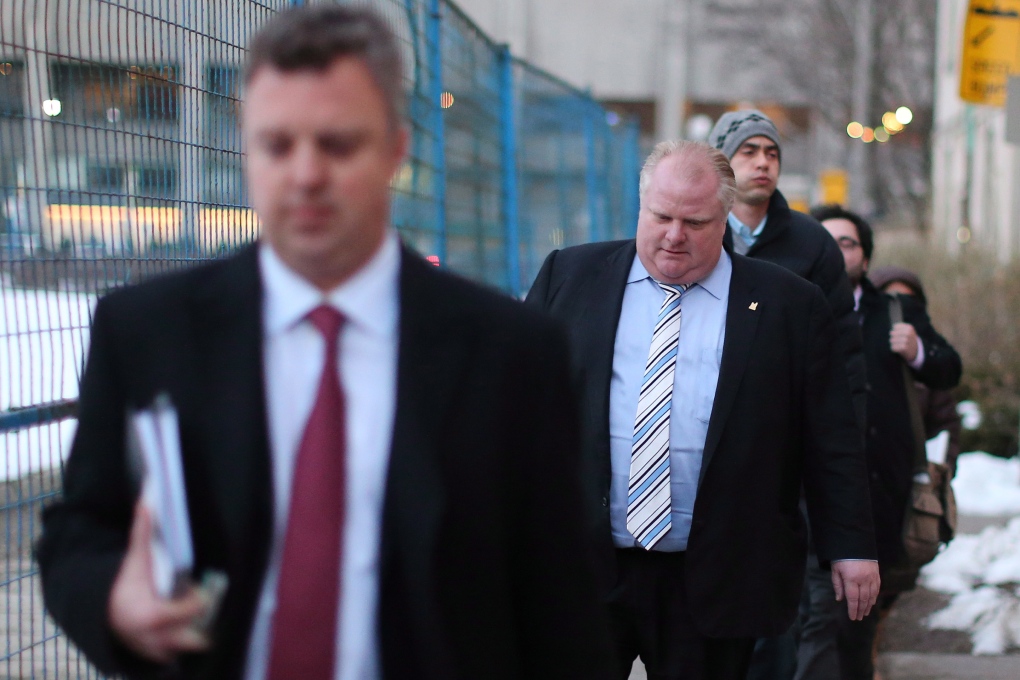 Toronto Mayor Rob Ford (centre) makes his way back to City Hall after leaving a courtroom on Monday, January 7, 2013 as he appeals against an earlier decision to remove him from office. (Chris Young / THE CANADIAN PRESS)

Still awaiting a decision about his legal appeal to remain in office, Mayor Rob Ford says his trials and tribulations over a tumultuous two years in office have not changed him.

“I’m Rob Ford. It’s gonna be pretty hard to change,” Ford said in a live interview with CP24 commentator Stephen LeDrew. “I’ve been in politics for 12 years. I return people’s calls. I watch every dime that’s being spent at city hall. I am who I am. I don’t think I have (changed).”

Keeping tight-lipped about his legal appeal, Ford said he would honour whatever decision the court reaches.

“I respect what the courts say, regardless of what comes out of it… I can’t make any comments until the day comes,” Ford said.

However he said he remains ready to hit the campaign trail should the appeal judges uphold an earlier ruling that ordered him removed from office.

“I love campaigning, I love debating, I love knocking on doors and telling people what we’re doing and then it’s up to (the electorate) to tell people who (they) want,” Ford said.

In November, Superior Court Justice Charles Hackland declared Ford’s seat vacant after he ruled the mayor had violated the Municipal Conflict of Interest Act by voting on a matter related to a donation to the football team he coaches.

His appeal was heard by a panel of three judges Jan. 7. Their decision is expected to be released within the coming weeks.

If Ford loses the appeal, he could run to regain the mayor’s seat if council chooses to hold a by-election to replace him. However council could also choose to appoint an interim replacement until the next election is held in two years’ time.

Ford also commented on some of the cutbacks proposed in the 2013 budgets, particularly those that could affect emergency responders.

The association is actively campaigning against proposed cutbacks to staffing, warning the move would put citizens in danger.

“It’s not true what they’re saying,” Ford said. “We have the exact same number of firefighters on the streets this year as we did last year, the same number of trucks – they just want more and more. Why are you going to have more if you don’t need more? It doesn’t make sense.”

Ford called the current budget “the best budget in Toronto’s history,” and cited a tax increase of less than two per cent and a rent reduction for 136,000 tenants in city housing.

“For the first time ever, we’ve got a balanced budget without using surpluses form the previous year,” Ford said.

He also took his council critics to task, accusing them of wanting to spend endlessly.

“The left wing at council will never be happy,” Ford said. “They just want to increase taxes as high as they can and keep spending on pet projects, on more government housing. I’m sorry – we can’t even take care of our existing stock of government housing.”

City council is set to vote on the 2013 budget on Jan. 15. A controversial 2012 budget packed with service cuts took 49 days to pass at council last year.