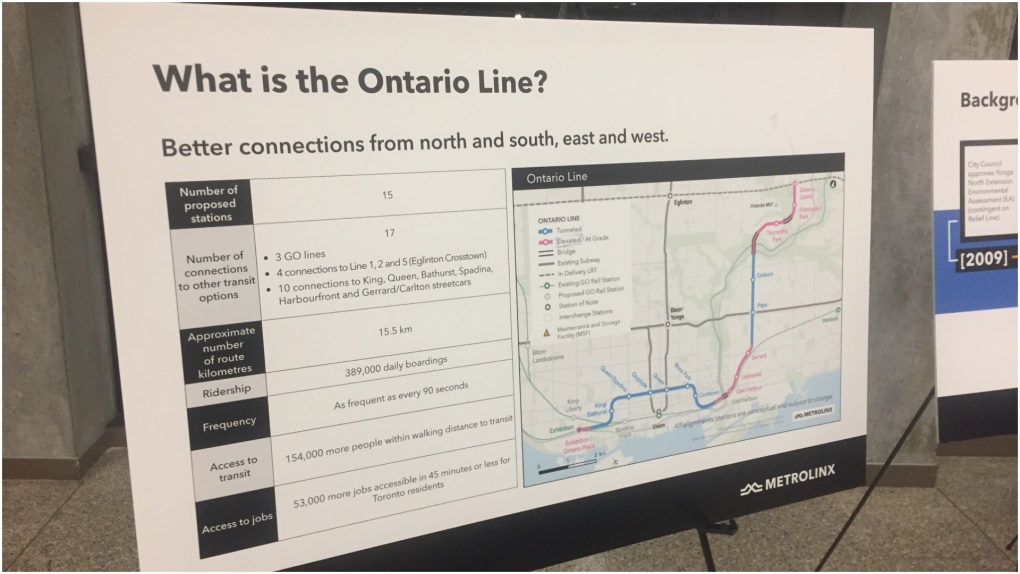 TORONTO -- The Ford government will soon begin the procurement process for the Ontario Line subway but it is choosing to split the project into two segments and will not seek out companies to design and build the northern portion terminating at the Ontario Science Centre, at least initially.

Transportation Minister Caroline Mulroney announced on Tuesday morning that the province would begin the procurement process for the 15.5-kilometre line by issuing two Requests for Qualifications (RFQs).

“By issuing these first RFQs we are one step closer to realizing our transit vision and helping to generate economic activity and create tens of thousands of jobs as the province recovers from COVID-19,” she said in a release.

The City of Toronto had been pursuing its own vision for a relief subway line that would have begun at Osgoode Station and travelled along Queen Street and Eastern Avenue before turning north at Carlaw Avenue and connecting with Line 2 at Danforth Avenue.

That plan was ultimately scrapped after the Ford government promised to spend billions on building four major transit projects in Toronto, including the so-called “Ontario Line."

The $11B project is also intended to act as a relief subway line that will take some of the pressure of Line 1 but it will be much larger in scope and span from Exhibition Place in the west and the Ontario Science Centre in the east.

Ford government officials have said that they believe the line can be built by 2027 by using “alternate technology” other than the TTC’s existing subway cars.

Experts, however, have cast doubt on whether that timeframe is realistic.

In the release issued on Tuesday, the Ford government does not make any reference to a completion date.

The release does say that Infrastructure Ontario and Metrolinx will evaluate all submissions and will “shortlist” teams to be invited to respond to a formal Request for Proposals in the fall.

It also notes that some segments “where the alignment joins GO Transit rail corridors, will be procured separately.”

Then transportation Minister Jeff Yurek told CTV News Toronto last April that the government had hoped for construction to begin on the line by the end of 2020, though it is unclear if that timeline still holds.

In the release, Associate Transportation Minister Kinga Surma said that the federal government needs to come to the table and pay their “fare share,” which she said would be at least 40 per cent of the four subway projects being pursued by the Ford government.

“To build projects of this magnitude we need everyone at the table,” she said.