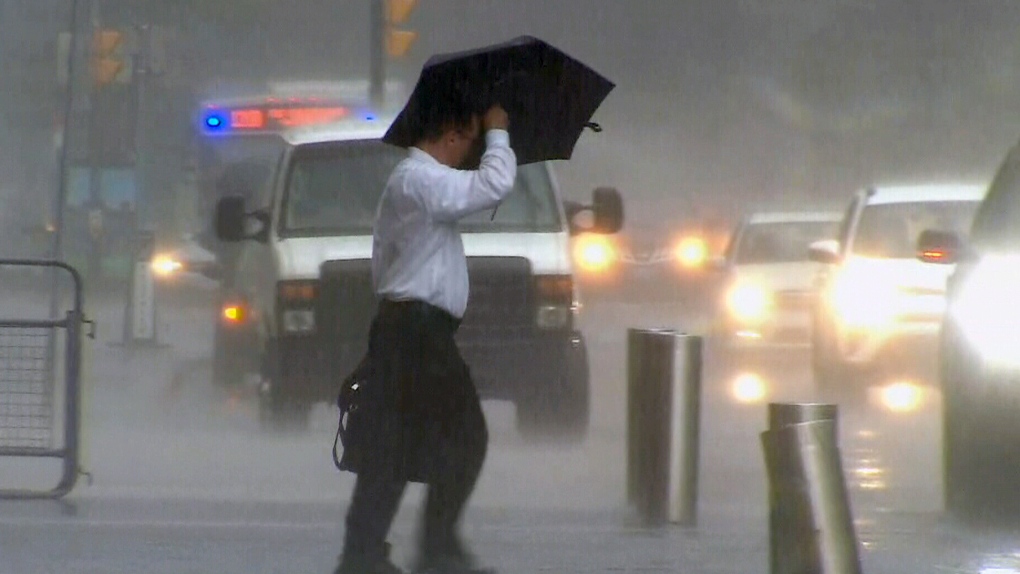 A man holds an umbrella as he walks through downtown Toronto during heavy rainfall on Tuesday, Aug. 21, 2018.

TORONTO -- A powerful storm that is headed to the GTA today will bring heavy rainfall, high winds, and freezing rain, Environment Canada says.

Toronto is under a rainfall warning, and a freezing rain warning has been issued for the rest of the Greater Toronto Area.

Environment Canada said Toronto could see between 40 and 60 millimetres of rainfall by this evening.

“Since the ground is frozen, the winter rainfall warning criterion of 25 mm in 24 hours is being met,” the national weather agency said in its advisory.

“The rain may change over to freezing rain beginning later this evening as temperatures dip to near the zero degree mark. Freezing rain warnings may be needed in some areas as this event draws closer.”

Strong winds of up to 80 kilometres an hour are expected on Sunday morning.

“If visibility is reduced while driving, turn on your lights and maintain a safe following distance. Localized flooding in low-lying areas is possible,” the advisory continued.

City crews will be available around-the-clock to respond to flooding calls along with members of the forestry department, which will be on standby to deal with fallen trees and branches knocked down by strong winds.

Transportation Services staff will be assisting in the city's storm response by monitoring road conditions and clearing catch basins and debris off of roadways.

Peel police have reported various road closures in the region due to flooding.

Phillips said the rainfall record for Jan. 11 is around 25 millimetres and the high temperature record is 11.7 C.

Environment Canada is calling for a high of 11 C on Saturday.

The agency is asking residents in the region to exercise extreme caution around all bodies of water and avoid driving on flooded roadways in low-lying areas and underpasses.

"Due to the potential for further snowmelt caused by above freezing temperatures in the region, rivers within the GTA will be experiencing higher flows and water levels, resulting in hazardous conditions," the advisory read, adding that high waves are possible along Lake Ontario's shoreline.

"The water levels in some of TRCA’s watercourses are still rising and have yet to peak, including the Humber and Don River."

The flood warning is in effect until Jan. 12.