TORONTO -- Six people had to be rescued from a burning building in North York after a fire broke out Friday night.

Fire crews were called to the apartment building on Gosford Boulevard, near Jane Street and Steeles Avenue West, just after 5:30 p.m.

Toronto Fire Chief Matthew Pegg said that the fire began on the seventh floor of the building, but quickly spread to multiple floors. At the height of the five-alarm blaze, 22 fire trucks and about 100 personnel were on scene.

"We have a total of six patients that crews have rescued and removed to the outside, transferred to the care of Toronto paramedics," Pegg told reporters at the scene. "Five of those patients have been assessed on scene and do not require transport to the hospital."

Paramedics said that one patient has been transported to the hospital with serious injuries.

“When our first crews arrived, there were heavy flames and smoke venting from one of the windows of the suites," Pegg said. "That escalated very quickly.” 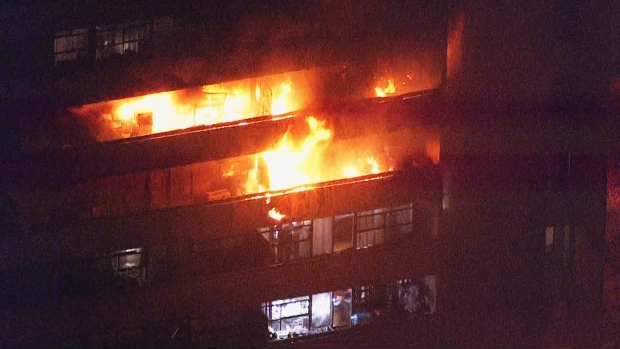 The fire chief called the fire “complicated.” Firefighters have had to physically climb floors as elevators inside the building are not working.

“(Crews) are exhausted. They are having to manually move up and down the 15 flights, they are soaking wet and of course it’s really cold tonight. These are difficult circumstances for the crews tonight.”

About four hours after crews were called to Gosford Boulevard, Toronto Fire Services said the fire was under control.

‘You can actually see the ashes,’ resident says

Chester Yim told CTV News Toronto that he had just pulled into the underground parking lot when he heard the fire alarm. He said he thought it was a false alarm until his wife called him from their 12th floor apartment unit to say there was smoke in their apartment.

When Yim went around to the back of the building, he saw the flames. He also saw his wife on the balcony with their two young children.

“At that moment, I just decided to run up the stairwell to get them down,” he said. “Going up the stairs you can actually see the ashes coming from the seventh floor in the stairwell.”

“I was screaming at them to get out. I got them out, dragged by daughter down the stairs.” 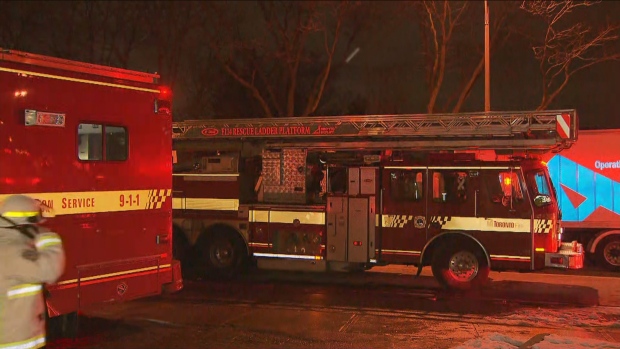 Another building resident said she was on her ninth floor unit when she heard the alarm ring out. She said she saw smoke and ran towards the stairs.

“We couldn’t get down because all the stairs have smoke and the elevators were blocked,” Giovanna Manfriniv said.

“I was freaking out. I called my mom because I was so scared.”

Manfriniv said that she heard people shouting that they couldn’t breathe because of the smoke Eventually firefighters advised her to stay in her unit and wait on her balcony until it was safe to evacuate.

Some residents may be displaced for 'a period of time'

The nearby Driftwood Community Recreation Centre has been opened in order to provide shelter to any residents who may have had to evacuate the building, Pegg said.

“We won’t know for some time, specifically how many people will be displaced because of the fire, but we are preparing for that proactively.”

About 700 people live in the building, he said. 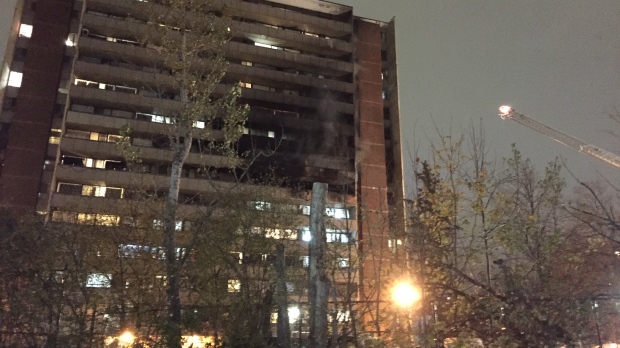 Speaking at the scene late Friday night, Toronto Mayor John Tory said that he has spoken to evacuated residents and have told them they will be “looked after.”

“I’ve explained that they will be allowed back in their homes as soon as the chief and everyone decides its safe,” he said. “I know that even when I talk to them that comes as a mild comfort to them because they are upset about not being able to get back into their home.”

Pegg said that investigative teams are on scene looking into the cause of the fire. The Ontario Fire Marshall has been notified of the incident.

The fire is under control and investigation/damage assessments will be underway. An emergency shelter is being set up at the Driftwood Community Centre at 4401 Jane Street for any displaced residents. @Toronto_Fire @TorontoOEM

Roads in the area were closed while crews worked to put out the fire.