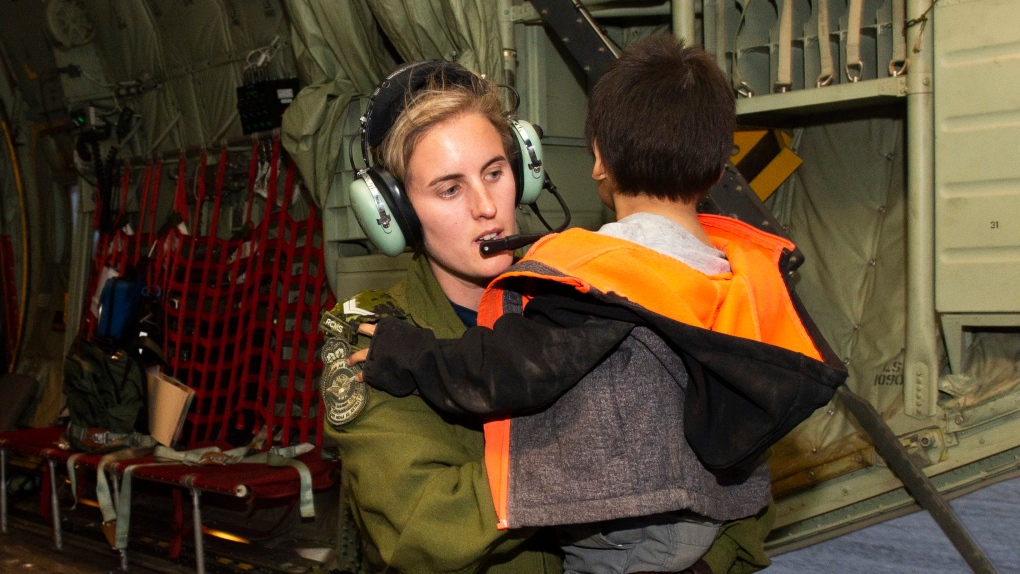 A member of the Canadian Armed Forces helps evacuate a child of the Pikangikum First Nation in Northern Ontario, as part of operation LENTUS on Thursday, May 30, 2019. Ontario's Ministry of Natural Resources says a wildfire threatening a remote Indigenous community in the province's northwest has grown several times larger. THE CANADIAN PRESS/HO-DND- LS Dan Bard 8 wing Imaging Trenton

Alvin Fiddler, Grand Chief of the Nishnawbe Aski Nation, which represents 49 First Nation communities across northern Ontario, said a forest fire burning near the eastern edge of the fly-in community has grown in the past 24 hours.

He said it has damaged the broadband communications line running through the area, knocking out all phone and internet service.

Ontario's Ministry of the Solicitor General is working with the Royal Canadian Airforce to fly Pikangikum residents to nearby communities.

Fiddler said he was hoping at least 1,200 people would be airlifted from the community on Friday.

However, at the end of the day the military said in a release that 580 people had been evacuated aboard three Hercules aircraft during six flights to surrounding communities including Sioux Lookout and Kapuskasing.

The release said the military would continue to provide aircraft for further evacuations as needed.

Fiddler said favourable wind conditions had given residents a respite from heavy smoke on Friday and opened a crucial window for evacuation.

He noted the list of vulnerable residents includes the elderly, those with respiratory conditions, young children, and anyone else whose presence is required to support them.

The community, which is 500 kilometres northwest of Thunder Bay, Ont., planned to evacuate roughly 1,600 of its nearly 2,300 residents, Fiddler said.

However, Solicitor General spokesman Brent Ross said he couldn't confirm the number of potential evacuees, citing the "fluidity of the situation."

Sioux Lookout is acting as a "hub airport," Ross said in a statement.

"Smaller fixed wing aircraft operated by private carriers on behalf of the Ministry of Natural Resources and Forestry will then be used to take the evacuees from Sioux Lookout to Cochrane, which is acting as a host community."

The Ministry of Natural Resources said four waterbombers and 14 ground crews were working to battle the blaze, estimated at around 3,000 hectares.

Environment Canada has issued a special air quality statement for the Pikangikum area, warning residents could experience symptoms such as coughing, headaches or shortness of breath.

"Children, seniors and those with cardiovascular or lung disease, such as asthma, are especially at risk," the agency said, adding the northerly winds should help improve conditions in Pikangikum but blow smoke towards communities further south.