Eight people were injured, including two boys who remain in critical condition, after a two-vehicle collision in downtown Toronto Sunday afternoon that saw one car pushed off the road and flipped onto the sidewalk into a group of pedestrians.

It happened at the intersection of Richmond and Yonge streets just after 2 p.m. Two cars collided, sending one vehicle off the roadway. The vehicle flipped “onto a number of pedestrians” who were walking on the sidewalk, police said.

Const. Tony Macias told CP24 at the scene that, in total, eight patients were taken to hospital with injuries.

“Both vehicles were travelling westbound. One of the vehicles cut into the lane of the other vehicle, causing it to flip, due to the impact (and) slide,” Macias said. “Seven of the parties that were transported to hospital were standing on the intersection over there when the vehicle collided with them.”

One witness told CP24 that the rolled-over SUV had actually “launched in the air” and was “turned on its side like a missile” before colliding with the pedestrians.

“I just couldn’t believe it. People were just being thrown through the air and he crashed into the building,” the witness, named William, said.

A driver from one of the vehicles was trapped, but has since been freed by emergency crews. Drivers of both vehicles remained on scene. There were no passengers in either vehicle.

Images from the scene showed the one vehicle lying on its side on the southwest corner of the intersection in front of a popular all-day breakfast diner while the other remained in the roadway.

The collision took place on a relatively quiet afternoon in the downtown core. Despite the Boxing Day holiday, traffic was generally light downtown.

Macias said the pedestrians were not standing anywhere they shouldn’t have been.

“They were standing there like any other citizen would and unfortunately, no fault of their own, the vehicle lost control and went right into where they were all standing,” he said. “(An) unfortunate thing to happen, especially on a holiday day like today.”

While the full circumstances of the collision have not yet been determined, Macias urged pedestrians and drivers alike to pay close attention to their surroundings.

“Just everyone, pedestrians unfortunately, have to keep their eyes open,” he said. “Motorists, be aware of their surroundings, the other vehicles around them and slow things down. Drive carefully because little mistakes have huge impacts in regards to road safety.”

The intersection was closed for several hours to accommodate the investigation, but reopened at around 9:30 p.m. 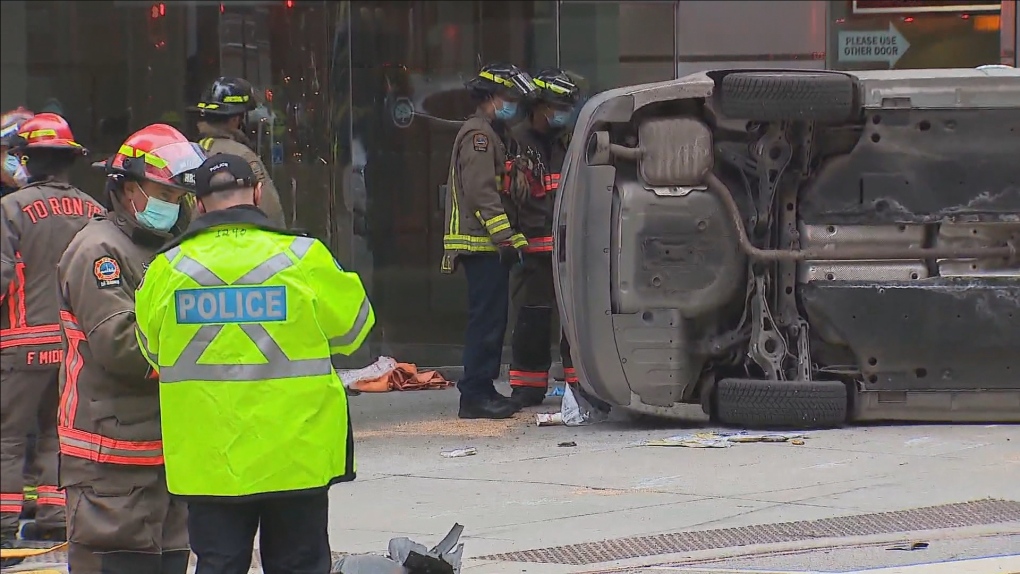