Driver involved in collision after pedestrian walks across Highway 427

TORONTO -- A driver was involved in a collision this weekend after he stopped to avoid a pedestrian who was walking across Highway 427 near Etobicoke.

Wayne Edward said he was travelling in the collector lane just south of Burnhamthorpe Road around 3 p.m. on Sunday when a man crossed the highway.

“I was heading home on the 427 northbound,” Edward said, speaking to CTV News Toronto.

“I moved over to the right because that was the exit I wanted to take.” 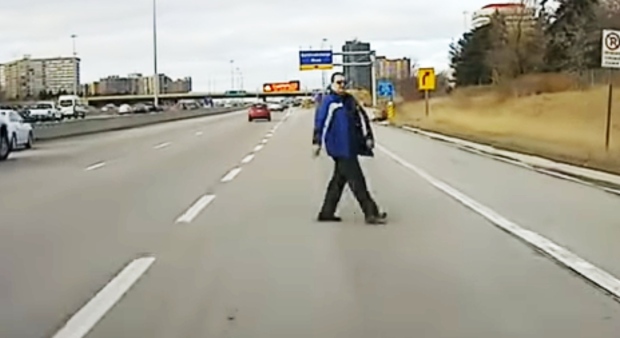 In video of the incident, which was posted to YouTube on Jan. 12, a man, who Edward said was involved in a seperate collision, can be seen walking from the barrier, where two cars are parked and two men are seen talking, to the shoulder, where two other men and a parked car are seen.

As Edward’s vehicle approaches at a high rate of speed, two other vehicles are seen braking in the middle lane and suddenly the pedestrian appears into view.

“I stop to avoid running him down,” Edward said in the video description.

At the time, Edward said he was travelling at about 80 kilometers per hour. The pedestrian appears in the video to try and alert Edward to slow down when his vehicle is just a few feet away.

“Until then I didn’t see anyone approaching from the left,” Edward said.

Moments later, the video shakes and Edward says his car was hit by the car behind him.

“And BAM, I get slammed into by a Porsche SUV, likely causing it to be written off,” Edward said.

Edward said the driver of the SUV, who was travelling with three members of his family, appeared to be in shock after the airbags in the vehicle deployed.

Edward said that while he sustained only minor injuries in the incident, the thought of what could have happened is troubling him. 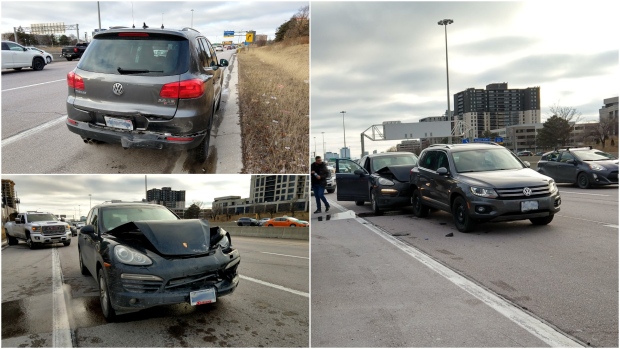 “I wasn’t able to get much sleep as I was wondering if I would have hit the guy,” Edward said, adding that he had to take the day off work due to lack of sleep.

Edward said he didn’t speak to the pedestrian, but noticed him at the collision reporting centre later that day.

Edward, who happens to volunteer as a rehab member with Toronto Fire, added that if you find yourself in a vehicle collision you should stay in your vehicle, if you can, until help arrives.

“Don’t be that pedestrian,” Edward said.

'He is lucky he’s alive': OPP reacts to video

Upon watching the video, Ontario Provincial Police Sgt. Kerry Schmidt told CTV News Toronto that the pedestrian not only put lives in danger, but he also broke the law.

“If you’re in a crash and you crash your car, and you’re on the left side of the highway and you want to get to the other side, you don’t become a pedestrian and walk across. He is lucky he’s alive.”

Schmidt said that charges could potentially be laid.

If you are in a collision, stay in your car, do not risk injury as a pedestrian, and get off the hwy as fast as you can https://t.co/xkXrd0Zmo0