Premier Doug Ford has announced he will not mandate COVID-19 vaccines for hospital workers, saying he's "not prepared to jeopardize the delivery of care to millions of Ontarians."

In a statement on Wednesday, Ford said mandatory vaccines for hospital workers is a "complex issue" that could result in the "potential departure of tens of thousands of health-care workers."

Ford said the government will keep monitoring the situation but has decided for now to maintain a "flexible approach by leaving human resourcing decisions up to individual hospitals."

He said the "small number" of COVID-19 outbreaks in Ontario hospitals is not worth enforcing a provincial vaccine policy.

His statement also pointed to news of surgery cancellations in British Columbia due to staff shortages after its vaccine mandate took effect.

Health Minister Christine Elliott took questions from reporters after Ford's announcment. She said while "this is the right decision for right now," the province is open to re-evaluating if more outbreaks occur.

Elliott said that if Ontario was to implement a mandatory vaccine policy there would be "significant job losses."

She said that despite the Ontario Medical Association being in support of mandatory vaccines for workers, there are specific hospitals that indicated their concerns about the impact.

Elliott would not name those hospitals.

Ford had written a range of experts and stakeholders last month asking for their opinions on the merits of introducing a vaccine mandate that would no longer allow unvaccinated health-care workers to remain on the job by participating in a regular testing program.

In a response to Ford's letter, released by Ontario's Science Advisory Table last month, the doctors argue that such a mandate "can enhance safety and reduce the risk of staffing disruptions due to COVID-19." 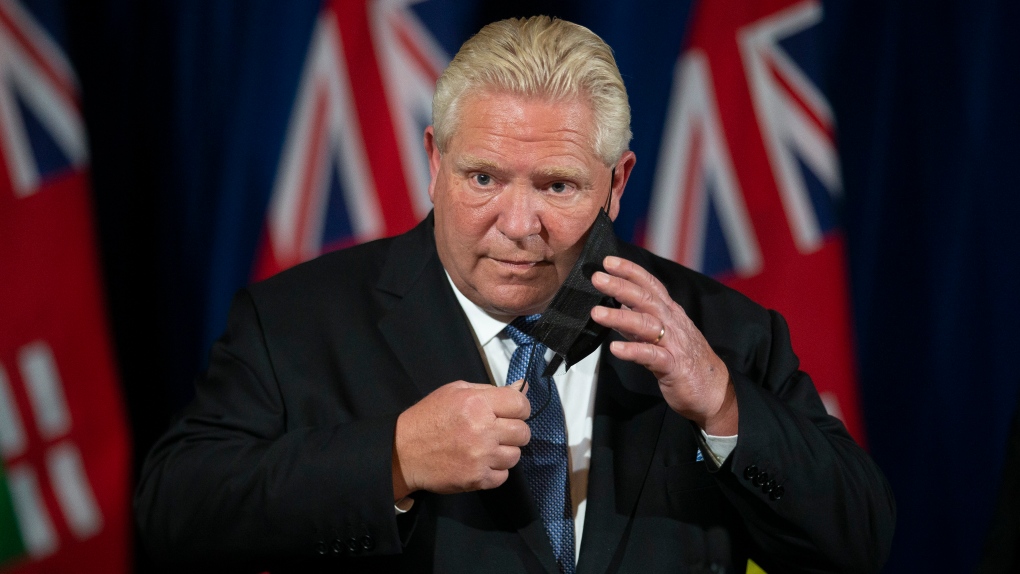 Premier Doug Ford has announced he will not mandate COVID-19 vaccines for hospital workers, saying he's "not prepared to jeopardize the delivery of care to millions of Ontarians." (The Canadian Press)

In his letter, Ford said that approximately 15 per cent of Ontario's health-care workers are believed to be unvaccinated.

Members of the science table said that the likelihood of unvaccinated workers contracting COVID-19 and being forced to miss significant time could have a bigger impact on human resources, given research suggesting that only a "small" number of workers will "actually leave the workforce to avoid vaccination."

'HE SHOULD BE ASHAMED'

"He's putting our most vulnerable patients in harm's way because he's scared that the Conservative anti-vax community won’t support his re-election otherwise," Del Duca said in a tweet. "He should be ashamed."

She says they still have rigorous testing schedules. #onpoli

"Unvaccinated staff should not be allowed in the ICU, in pediatric wards with sick babies, in the homes of vulnerable home care patients, or anywhere at all in health care, or in our children’s schools," Horwath said.

The Ontario Hospital Association (OHA) also expressed their disappointment over Ford's announcement, saying the province "can't afford to let its guard down."

"There's a strong consensus among Ontario's hospitals for a provincial policy requiring health-care workers to be fully vaccinated," a statement from the OHA said.

According to the OHA, 120 out of the 141 hospitals agreed to a mandatory vaccine policy.

The OHA said health-care workers are already required to be vaccinated against 17 different conditions, including measles, rubella and tuberculosis.

"COVID-19 should be treated no differently," the OHA said.

How much water do you need to drink in a day? 'Eight glasses a day' rule a myth: study