Did you know Toronto Pearson Airport has its own fire department?

Toronto Pearson Airport is like a small city, with approximately 50,000 employees and nearly 50 million passengers moving through its terminals and runways every year—which is why the transportation hub has its own full-service fire department.

The fire department works out of three fire halls and responds to about 6,000 events every year, according to Platoon Chief David Spratt.

“Those range from a medical event up to an aircraft incident,” he said.

The crews also respond to calls like fuel and chemical spills, vehicle collisions or equipment and structure fires. 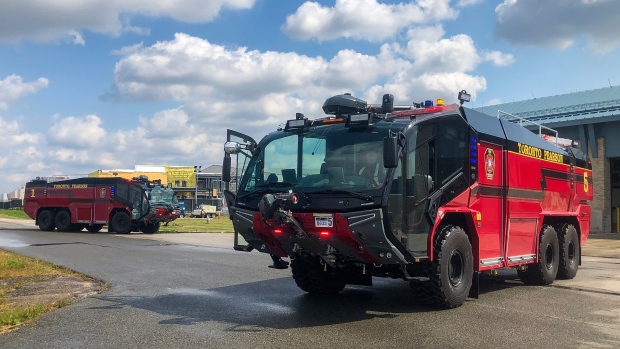 The Rosenbauer Panther 6x6 trucks can spray water almost 200 feet and move enough water to fill an average-sized swimming pool in just 10 minutes. They can also go off-road and climb a hill with a 50 per cent incline fully loaded.

"Every time you see one of these trucks out on the apron areas, as you're travelling to and from, in and out, of Toronto Pearson it doesn't always mean it's a life and death situation.”

“Because an aircraft incident can evolve into a major incident quite quickly, we do go on standby for a lot of non-emergency events... we are there as a safety role." 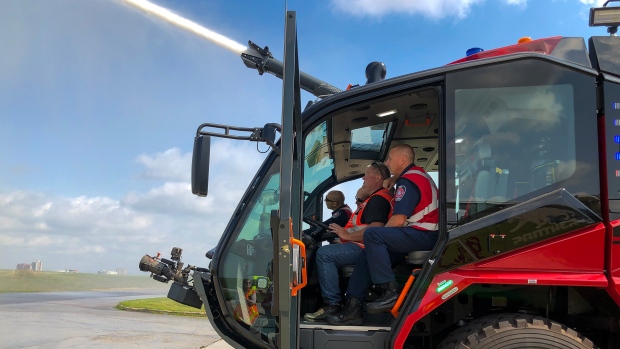 Major aircraft incidents are very rare. While training Toronto Pearson firefighters, Karlo Groenewg, ARFF Specialist with Rosenbauer, said that "less than 1 per cent of you will ever shoot on a fire, that's good, means that planes aren't crashing every day, right?”

Denes said that as the new trucks are put into service, the older trucks "will be cycled out to our Fire and Emergency Services Training Institute, where firefighters undergo initial and recurring training."

The new fire trucks will enter full service later this fall after firefighter training is completed.