The detective who solved the horrific double-murder suicide of tourists in a Toronto hotel has revealed the "peculiar" clues left behind in the room that made him realize the killer didn't mean to take his life.

It was Labour Day 2006 and police were called to Toronto's largest hotel, known then as the Delta Chelsea in the heart of the downtown.

There on the 19th floor, by the elevator, they found a man naked and bleeding to death.

Then Det. Sgt. Steve Ryan, now CP24's crime analyst, said that when he stepped off the elevator, there was blood everywhere.

"It wasn't just like it was painted in blood, it was blood smears, it looked as through it was actually fingerprints,” Ryan said on this week's episode of The Detective. "You got the impression you could see this man had been running for his life and was trying to grasp onto anything he could and his finger prints were coming down the wall in blood."

Ryan said there were bloody fingerprints all over the steel plate where the elevator's up and down buttons were, but the murder victim couldn’t seem to hit the down button in his bid to escape his attacker.

By the time Ryan arrived at the first crime scene by the elevator, the victim had already been taken to hospital and was pronounced dead. 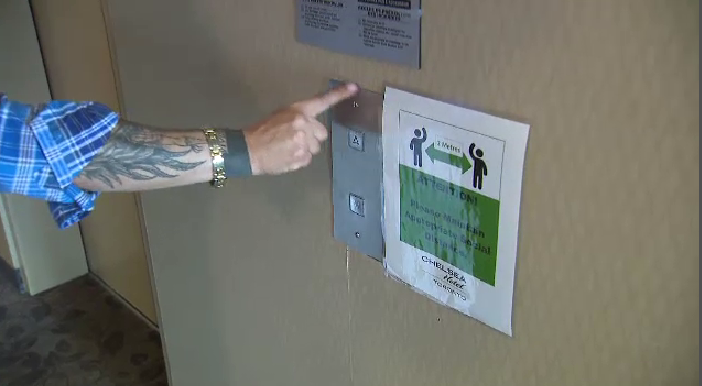 "He was naked at the time, so he obviously came from one of the rooms," Ryan said. "Witnesses heard screaming and shrieking. Witnesses described a lot of pain and they could hear the footsteps and one woman said she actually saw this naked man run past her, past her room and this is where he wound up. Obviously he was trying to get to an elevator away from whoever was attacking him."

There was a trail of blood leading from the elevator hallway back to room 1908 and when police opened the door, Ryan said there was a horrific crime scene.

There were two bodies inside the room, a male and a female, and blood everywhere, Ryan said.

Worst scene I have ever seen with regards to the amount of blood. Just a complete devastation. You could hardly see the walls, they were covered in so much blood. It was all on one side of the room, which was odd. The washroom was covered. Obviously one of them ran to the bathroom to try to save themselves at one point because it was covered in blood."

When Ryan arrived at the hotel, he already knew the three dead people on the 19th floor were tourists from Europe. They had been part of a tour catering to people with hearing impairment. The worry for investigators was the possibility that there was a tourist killer on the loose.

Ryan said there was already pressure to find out what had happened.

"You want to get every homicide right of course, but this one had the ability to affect an entire industry had we got it wrong or had there been somebody killing tourists in the city of Toronto," Ryan said. "It was one of those cases because we needed to make sure we got everything exactly right."

Earlier that year in a luxury Mexican resort, a Woodbridge, Ont. couple had been brutally murdered in their hotel room. The murders of Domenic and Nancy Ianeiro remain unsolved to this day.

Before the bodies in the hotel had even been removed, Ryan recalls the murders of the Swiss tourists were already making headlines.

"When I arrived on scene here, it was full of media. I bet you there would have been 50 media outlets here, more so than I have ever seen at one scene all at one time. It just shows you how much attention this call got right off the start."

Delt Chelsea slaughter 2006. I was the baby DS in charge of this case. Most gruesome scene ever. I explain to Austin my thoughts regarding the sheer horror in a hotel room and how I assessed the scene with my team. Scene so devastating-i only took my main D in with me. Airs Mon. pic.twitter.com/GVtsq25hUt

Ryan said top brass at Toronto police headquarters were under the gun to get some answers very quickly.

"The concern was from city council and from the senior officers with the Toronto Police, do we have a tourist killer running around here in the city of Toronto? Big concern."

Ryan said he was also worried with three dead bodies that their killer might still be in the hotel hiding. He immediately locked it down. It was Labour Day, and the 26-storey hotel was near capacity.

The former homicide detective remembered walking into the lobby full of guests wanting to know what was happening.

"So we walk through this lobby and you could hear a pin drop. It was very quiet. People were just sitting, standing, just waiting for some direction."

There are 1,590 rooms at the Chelsea Hotel and beat cops over the next five hours set out to knock on every door. No one could come into the hotel, no one could leave.

"Every door was knocked on, everybody was interviewed. The rooms were, I don't want to say searched, but they were investigated, people were co-operative and they allowed officers to look into their rooms because we had to make sure there were no victims."

But Ryan recalls there was still a concern that a killer was hiding in the hotel under the noses of investigators, blending in with other hotel guests, or a hotel guest was the killer. 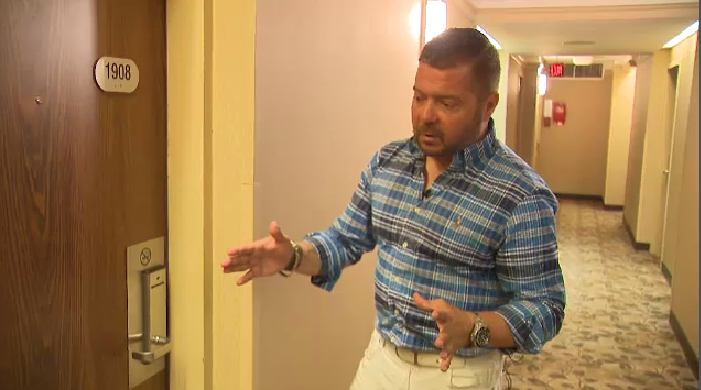 Canada's biggest hotel had to be entirely swept by police.

There would be a suspect Ryan said, but that suspect was already dead.

Kaufmann was found by the elevator, the two others in the room.

"So when you open this door there was a female body just on the inside of the door, she was in a nightgown. She had a knife in her at the time and it turned out to be an ante-mortem wound, meaning that it was done after death. You are able to tell evidence-wise if that was the case."

On the other side of the hotel room on the bed, the other male. But Ryan said strangely he was lying on his back with his eyeglasses on and a book on his chest. And while the woman was covered in blood, the other man had little blood on him.

"That was all very peculiar to me. There was no sign of a robbery because all the luggage was in there. So what happened? Was there a suspect or was one of these three people responsible for this?" 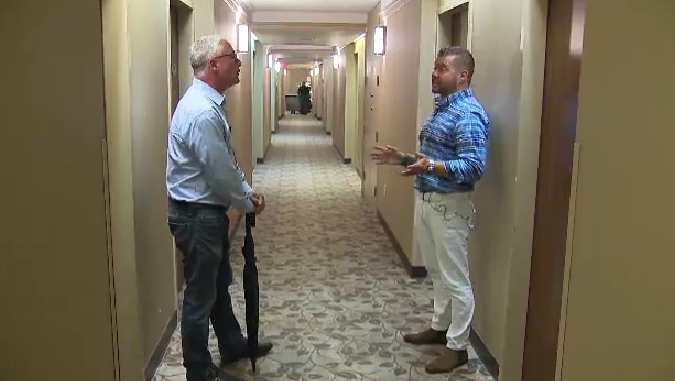 Soon the pieces of the puzzle would start to fall in place for the homicide cops. They learned Wyrsch and Aschwanden were friends back in Switzerland.

"They were friends for a very long time, very long time and he had a love interest in her and she didn't really feel the same way. The two of them had booked a trip to visit Canada."

But at the last minute, the two friends agreed to let Wyrsch’s new boyfriend, Kaufmann, join them in Toronto and stay in the same room on the trip across the country, the first night in Toronto.

The room itself, Ryan said, would begin to offer clues as to why two of them were so violently murdered, the other male, showing little signs of violence but still dead in the bed.

"The knife that was left in that woman’s chest had the name of the guy who was on the bed with the glasses on, it was his, a very large Swiss Army knife that had his name on it."

Ryan said they found a letter the man in the bed had written to his mother explaining that everyone else on the trip seemed to be having a good time, but he couldn’t take it anymore, the new boyfriend in the bed with his female friend in the same room.

"So it was almost like a goodbye letter to his mother and he put the letter down and killed them."

The theory is that he was awake 3 a.m. and the couple were being intimate in the bed next to him, throwing him into a jealous rage, attacking them both with his knife.

It would be ruled by the coroner as a double-murder suicide. But Ryan said he never believed the killer planned to take his own life.

Ryan said he thinks the murderer accidentally killed himself and was totally unaware he was bleeding to death on the bed with his glasses on and book in hand.

"My thoughts were: Do we have a suspect or do we have a suspect? And that was what I thought when I first walked in that room. Wait a minute, I might be looking at our suspect right here on the bed for all the reasons I described, the direction of the blood, the glasses on, the wounds on his chest, this guy had, I would say, 30 or 40 small little nicks just above his heart. They are called hesitation wounds."

Hesitation wounds because Ryan believes he didn’t have the nerve to plunge a big knife into his chest. Most people wouldn’t, the former detective said.

"Training tells me and pathology training as well, suggests that we as humans cannot bring ourselves to stab ourselves. We can harm ourselves, jump off a balcony, shoot yourself in the head, but you cannot take a sharp object and stick it in your own skin for whatever reason. This guy had 30 to 40 hesitation wounds. They were kind of pretend nicks, an attempted suicide."

After stabbing the other two and nicking his chest with the knife, he lay down on the bed, picked up a book and began reading. Awaiting police to knock on his door after the first body by the elevators was discovered.

Ryan believes he didn't know he was dying.