A pilot project that takes aim at towing illegally parked vehicles along Queen Street is set to begin Monday.

The Queen Street Towing Pilot, which will run for between six and eight weeks and cost approximately $80,000, is a data-driven measure being conducted by the City of Toronto in an effort to ease traffic congestion during the afternoon rush hour.

“The sooner we can get those vehicles moved, and get others on their way, the better.”

This morning we announced the Queen Street Towing Pilot which will begin Monday and run for the next 6-8 weeks. This pilot project will relocate illegally parked vehicles along Queen Street, from Fallingbrook Rd to Ronvesvalles Ave, to designated side streets nearby. pic.twitter.com/MYnsZBn7gI

The project, which will take place on Queen Street between Fallingbrook Road in the east and Roncesvalles Avenue in the west, will relocate illegally parked vehicles to designated side streets; Cameron Street, Ryerson Avenue, Michael Sweet Avenue, and Stephanie Street, or move them to other open locations.

This effort is meant to “shorten tow truck response times and contribute to fewer delays along Queen Street,” according to the City. Officials said due to the fact that police pounds are located outside of the city’s downtown core, it takes up to 90 minutes for a tow truck to move just one illegally parked vehicle and then return to find others. 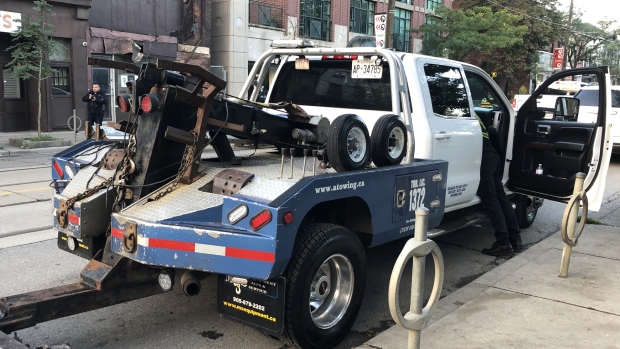 About 10 vehicles are towed along the main street each day and approximately 45 tickets are issued to drivers, according to the City.

“The towing of illegally stopped vehicles in our rush hour routes is a critical element in getting Toronto moving,” Supt. Scott Baptist with the Toronto Police Service’s traffic operations unit said in the news release. “This pilot will allow us to test new concepts and will help inform decisions that we hope will make traffic move more efficiently in our city.”

The drivers of vehicles towed during the pilot project will receive a parking violation notice, including a $150 ticket, but the towing fee will be waived.

The results of the pilot project will be tracked by officials and if it proves successful, then officials will look into expanding it to the morning rush hour as well.

“I look forward to seeing the results of this pilot and I’m confident it will help us in our ongoing efforts to combat congestion on Queen Street and on other busy routes in Toronto,” Tory said.

If your vehicle is towed come Monday, police are urging drivers to call its non-emergency line at 416-808-2222 for its location.