Couples 'kiss and tell' in support of U.S. gay rights 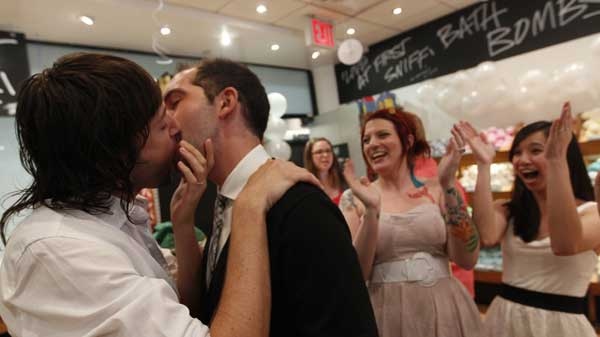 Lush Cosmetic employees Daniel Gervais, left, and David Casavant take part in a Kiss and Tell event in support of marriage equality as Amanda Halderman, second from right, and Perry Sun cheer them on, Saturday, June 18, 2011 in New York. The State Senate left the Capitol on Friday without tackling same-sex marriage and other key issues, but Gov. Andrew M. Cuomo insisted lawmakers are on track to take action before the end of the legislative session slated for Monday. (THE ASSOCIATED PRESS / Mary Altaffer)

TORONTO - Canadians took part in a smooch-in Saturday in support of gay marriage rights in the United States.

More than 1,100 people across North America -- dozens of them Canadians -- kissed outside Lush Cosmetic stores, the company said.

The "Kiss and Tell" event was part of the company's two-week campaign to convince the U.S. government to change the marriage law.

Gay, straight, bisexual and transgendered people in Toronto, Ottawa, Vancouver, Edmonton, Montreal and Calgary kissed for the cause but turnout was small in Canadian cities.

Jesse Showers, 21, and Sean Rockwood, 24, were among 10 couples who locked lips outside the Lush Cosmetics store on Toronto's Queen Street West after a dish of breath mints was passed around.

"It's about time to kind of start sending a message to the U.S. government to really start doing marriage equality as a priority," said Rockwood, a store employee.

"Being gay, marriage equality is obviously a big concern for me and if I do get married some day, I want it to be recognized wherever I go," said Showers.

Couples kissed at 11:38 a.m. local time -- chosen because 1,138 is the number of federal benefits and responsibilities afforded married Americans but denied to gay and lesbian couples living in the U.S., said store spokeswoman Maram Aoudi.

Participants signed postcards that will be delivered to the U.S. Congress, urging it to overturn the 1996 Defence of Marriage Act. The law states a marriage is a union between a man and a woman.

Daphne McElroy, 18, kissed Sara Elizabeth Armstrong, 19. McElroy, who said she's bisexual, said she went to the event to support gay rights. "I don't think it's fair that people are treated differently because of their sexual orientation," she said.

At the Robson Street store in Vancouver, 23 couples kissed while eight couples puckered up in Victoria. There were smaller numbers in Montreal, Calgary and Edmonton, store officials said.

Ten couples kissed in Ottawa's Byward market, far fewer than the 40 who had RSVP'd on Facebook, said assistant manager Laura Johnston. But about 50 people who walked by the store stopped and signed the postcards, she said.

"But a surprising number ignored us and didn't take the time to sign them," said Johnston.