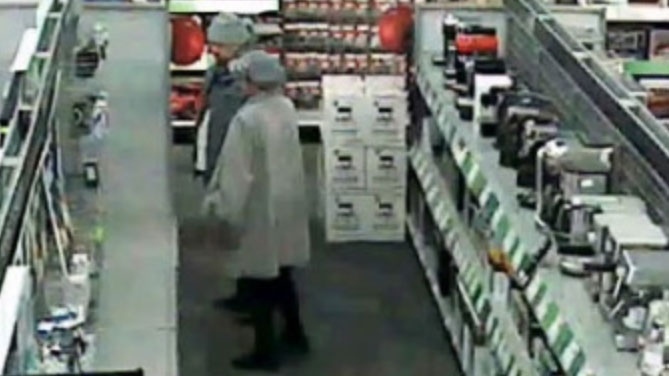 A couple is seen in security camera footage from a Best Buy in Barrie on Saturday, Nov. 29, 2014. (Barrie Police Service)

Barrie police are searching for a man and woman who they say used a "fake pregnancy belly" to steal from an electronics store.

Police were called to a Best Buy location in the south end of the city on Saturday when staff reported the couple had stolen some items.

Witnesses said the man entered the store first, looking at products on shelves while talking on the phone. The woman entered shortly after, also on the phone, and found the man in one of the aisles.

Police said the man then took items out of the packaging and passed them to the woman, who put them under her shirt inside what they believe was a fake stomach.

The couple then left the store and drove off in a grey Dodge Caravan.

Police alleged the pair stole $5,000 worth of merchandise from the store.

Police said the couple was also spotted at a Best Buy location in Newmarket later the same day, but have not said whether anything was stolen there.

The woman is also East Indian and in her late 30s. She was wearing a long grey coat, black pants and black boots, in addition to what police believe is a fake baby bump.