An advocacy organization for TTC riders says that “chronic underfunding” is to blame for the overcrowding, long wait times and regular delays that are keeping many residents from utilizing public transit.

The organization TTCriders released what they are calling a “bolder version” of the TTC’s ridership growth strategy on Thursday morning at Dufferin Station.

The strategy calls for the introduction of dedicated lanes and signal priority on all streetcar routes and 20 of the city’s busiest bus routes as well as a 25 per cent increase in service across the board.

Anna Lermer of the group TTCriders speaks with reporters during a press conference at Dufferin Station on Thursday. (CTV News Toronto) 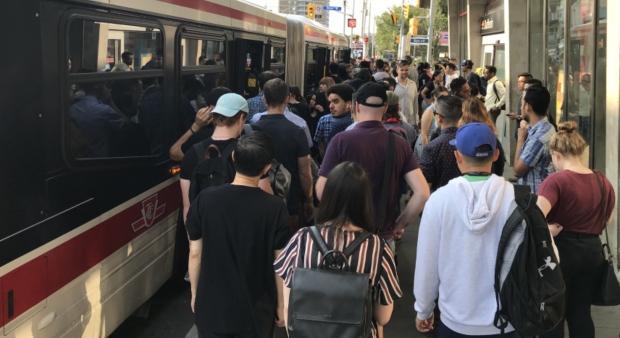 Commuters wait to board a crammed bus at Dufferin TTC Station on Thursday morning. (Francis Gibbs)

The strategy also calls for a 10 per cent reduction in the cost of cash fares and the creation of a $50 monthly pass for low income earners, among several other proposals.

The improvements could be supported by increasing the per ride subsidy to the TTC to $2.60 from $1.14., the strategy notes.

“The TTC already knows about a lot of these solutions but they don’t have the funding to resource those so this report is really about pointing to that and making sure transit riders understand that we know how to solve these problem, other cities are doing it really well and Toronto just needs to step up,” Project Coordinator Anna Lermer told reporters. “I think it is going to take all of us coming together, as many transit riders as possible, to really put the pressure on our governments.”

The TTC’s per ride operating subsidy is the lowest in North America.

The subsidy only makes up about 30 per cent of the TTC’s overall budget compared to 60 per cent in Vancouver and 50 per cent in Montreal.

The strategy released by TTCriders on Thursday points out several avenues through which additional public funding could be directed to public transit, including the revival of the vehicle registration tax ($55 million), the introduction of a 50 cent ridesharing fee ($33 million) and a 50 cent parking levy ($171 million).

The strategy also says that a further $580 million could be raised through a one per cent income tax hike on high earners.

“We used to get proper funding from the provincial government but it was cut in the 90s and has never been reinstated and the city refuses to raise new revenue through increased property taxes and things like the vehicle registration tax,” Lermer said. “It is a refusal to raise the revenue needed using this line that we can’t afford it but we definitely can and we should. Transit makes our city move and we need it to be better.”

TTC officials have previously said that ridership growth has been largely stagnant since 2014 with about 535 million trips on the system each year.

It should, however, be noted that the sale of adult metropasses has declined over that time period with a 2018 report revealing that the number of passes sold was down 14 per cent (403,000) over a four year period.