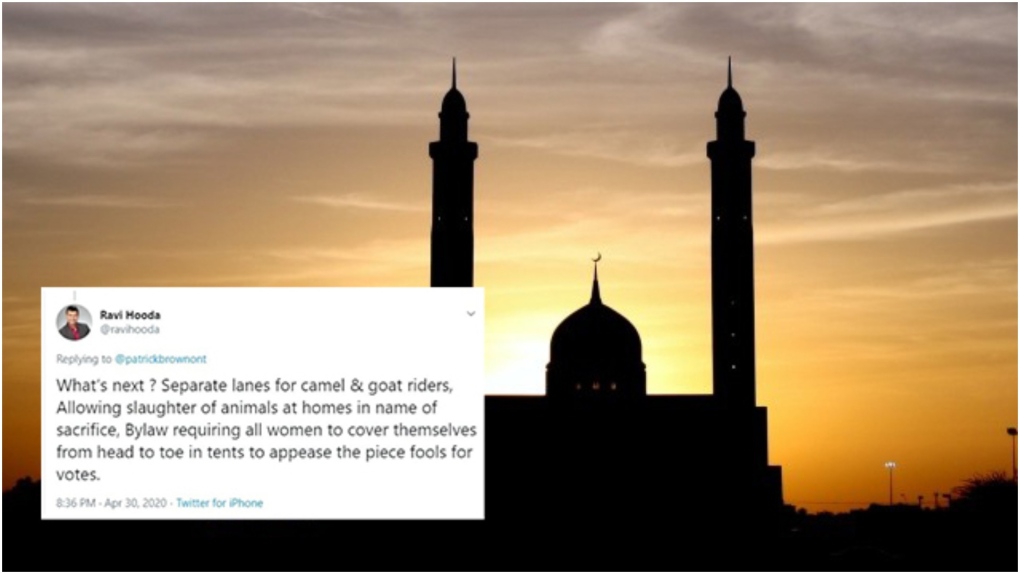 TORONTO -- The Peel District School Board says it has fired a school council chair in Brampton, Ont., after he posted an Islamophobic tweet last week.

Ravi Hooda made the comment in reply to Brampton Mayor Patrick Brown, who announced a by-law would allow mosques to play daily calls to prayer over loudspeakers during Ramadan.

Brown said the change was made to promote a sense of community for Muslims, who would generally gather for prayer during the fasting month of Ramadan but can't because of COVID-19.

"What's next?" said Hooda in a tweet that has since been removed.

"Separate lanes for camels and goat riders, allowing slaughter of animals at homes in name of sacrifice, Bylaw requiring all women to cover themselves from head to toe in tents to appease the piece (sic) fools for votes."

The principal of the school where Hooda was a councillor said those comments didn't help create a safe and inclusive space at the school.

"We immediately conducted an investigation into the matter, as the content is a clear contravention of the Peel District School Board's Safe and Accepting Schools Policy," said Robin Perri, principal at Macville Public School, in a statement.

"As a result, the individual is being removed from the role of School Council Chair and will not be able to participate on School Council, in any capacity."

Hooda was also a real estate partner with RE/MAX, which has since terminated their relationship.

"RE/MAX does not share nor support his views, and we can confirm that he has been terminated and is no longer affiliated with RE/MAX," read a statement from Christopher Alexander, executive vice president of the real estate firm.

"Multiculturalism and diversity are some of the best qualities of the communities we operate in, and we are deeply committed to upholding these values in all that we do."

The Brampton mayor commended RE/MAX on Tuesday for taking quick action to end their partnership with Hooda.

"Hate and islamophobia have no place in our community discourse," said Brown on Twitter.

"We love our diversity and mosaic of faiths in Brampton."

This report by The Canadian Press was first published May 6, 2020.