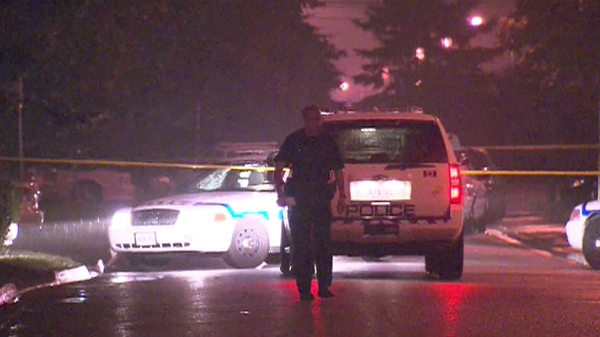 Peel Police investigate the region's fifth homicide of 2010 after a man was found shot dead in his garage.

Peel Regional Police have made another arrest in connection with a late August homicide that left a young Brampton man shot to death in his family's garage.

On Thursday, police announced they had arrested one man in connection with the death of Darren McLean, 23, on Aug. 21.

Michael McIntosh, 20, has been charged with second-degree murder and made an initial court appearance on Friday. McIntosh is a former Brampton resident, but is now considered to be of no fixed address.

Police said Friday in a news release they had arrested David Henry Thomas, 24, of Brampton and charged him with being an accessory after the fact to murder.

He was also to appear in court Friday.

"He didn't have anything to do with the murder," said Const. Thomas Ruttan, a Peel police spokesperson.

But police are alleging that Thomas helped McIntosh elude capture, he said.

No allegations against either Thomas or McIntosh have been proven in a court of law.

On Thursday, police warned that anyone who aids suspects or otherwise obstructs a criminal investigation could face charges themselves.

The shooting occurred at a Wickstead Court residence in Brampton, where McLean lived with his mother and sister. Police said a family member discovered the mortally wounded McLean and called 911.

Friends of the victim said he was a forklift operator, an aspiring rapper and a "good kid." He lived at the home with his mother and sister.