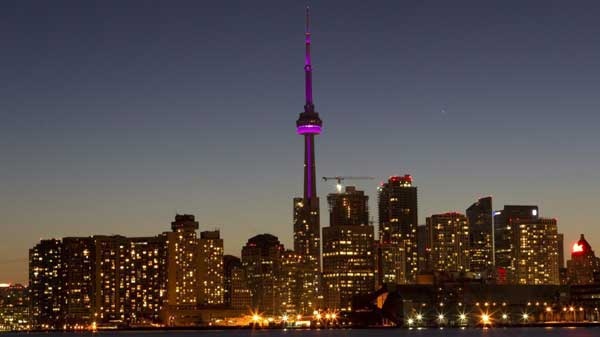 The Toronto city skyline is pictured moments before the start of Earth Hour on Saturday March 26, 2011. Buildings and homes across the country are going dark as Canadians take part in the fifth annual Earth Hour. (Chris Young / THE CANADIAN PRESS)

Toronto scored the second spot in an annual report ranking 26 cities for their place as global centers in the business world.

The recently released "Cities of Opportunity" report from PricewaterhouseCoopers ranked Toronto one notch lower than top-rated New York, but higher than traditional alpha cities such as London, Tokyo and Hong Kong.

The report takes into consideration a city's economy, but it also factors in various livability characteristics including a city's size, safety and housing costs.

According to the report, Toronto was noted for its intellectual capital and innovation, which studies how a city currently develops it's "mindware" that will help it build in the future.

Toronto also ranked among the best cities including Stockholm, Sydney and San Francisco in demographics and livability, which looks at the socioeconomic well-being of a city.

Toronto lost points when it comes to transportation, with the report citing the cost of public transit as a detriment.

The city ranks fifth in the category of "lowest cost cities," which was based on factors such as the total tax rate, cost of business occupancy and cost of living, among others variables.

According to the report, Toronto is still considered a beta city that operates slightly off the beaten path among alpha cities such as London, Paris and Tokyo. Other top-ranking beta cities include San Francisco, Stockholm and Sydney.

The report states, "These beta cities arguably may not ‘have it all' if you're seeking to crown a heavyweight champion among world cities where size, a major capital market and 24/7 buzz do matter. But they just may have what they need for a world that is growing less reliant on geography and more dependent on attracting and nurturing good people to innovate and build the future with fresh eyes."

Toronto is one of the cities in the report that was regarded as a regional or national centre only a 25 yeas ago. The beta cities "may post significant competition to great cosmopolitan centers such as London, Paris, Tokyo and New York," the report states.

Click here to view the full "Cities of Opportunity" report from PricewaterhouseCoopers.