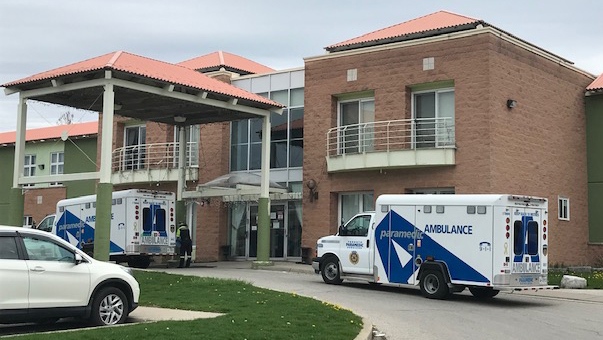 After his work, Werner would go to the nursing home, located near Keel Street and Sheppard Avenue West, to see his mother and join her for dinner.

But now, the novel coronavirus has drastically changed his daily routine. Visits to nursing homes have been restricted to protect vulnerable residents.

Just like most families, Werner has been doing window visits.

“She doesn’t want to eat now because she has not seen me,” Werner said. “She wants to see me beside her.”

To make matters worse, Werner said his mother is among the 62 residents who have tested positive for COVID-19 since an outbreak was declared at the facility on April 17.

In addition, a total of 74 staff members at the facility have contracted the virus. All are in self-isolation.

Long-term care homes have been disproportionately impacted by COVID-19, which has been known to infect more people in the elderly population.

As of Sunday, more than 1,200 residents in Ontario long-term facilities have died of the virus.

At Downsview Long Term Care Centre, which is operated by GEM Health Care Group, the death toll stands at 35 as two more residents with the virus died on Sunday.

Of the deaths, at least 25 were recorded this month.

“We offer our sincerest condolences to the residents’ families and friends. To date, we have had a total of 35 residents pass away with COVID-19,” GEM said.

A longtime personal support worker at the home has also died earlier this month after contracting the virus, a union representing health-care workers said.

When he learned about his mother’s positive test result, Werner said he felt like he was going to die.

He said his mother presented symptoms of coughing and body pains.

After more than two weeks of battling the virus, he said his mother is now virus-free.

Werner said the government should provide more help for health-care workers who are fighting the virus on the front line.

“I believe the government has to give more help,” he said, adding that the facility doesn’t have enough personnel to take care of people.

To address the staff shortage, GEM Health Care Group said it has been getting help from several health groups, including the Central Local Health Integration Network and a team from Humber River Regional Hospital.

Toni Deluca, who was visiting her mother at the nursing home for Mother’s Day, said the past few weeks have been tough.

“It’s the feeling of helplessness that you can’t hold her hands and say either it’ll be okay or come home,” Deluca said, adding that her mother refused to come home because she loves her independence.

Despite the grim situation at the facility, Deluca said she is grateful that her mother is virus-free, testing negative twice.

On Sunday, she said she was happy that her mother recognized her and waved back at her through the window.

“Since she’s been at the nursing home, her dementia has decreased,” Deluca said. “This is why I’m so mad at this virus because this nursing home gave me back my mother the way she was.”

Deluca said the staff at the home have been very helpful, fulfilling her mother’s needs and constantly communicating with her about the situation.

She said staff have been giving her mother puzzle and colouring books, which keeps her busy. That's why, she said, she's been advocating for more staff at the facility.

“We just take it one day at a time, and hopefully this is all behind us one day, and everybody stays healthy.”