A group of anti-vaccine protesters gathered outside one of Toronto's busiest hospitals Monday after being warned not to harass or obstruct health-care workers.

An organization that calls themselves the Canadian Frontline Nurses orchestrated protests against vaccine certificates in all 10 provinces, including outside Toronto General Hospital.

Organizers said they wanted to take a stand against what they called "tyrannical measures and government overreach."

On Monday, Toronto Mayor John Tory said police would be "keeping a very close eye on these demonstrations" to ensure they don't obstruct any hospital operations.

Tory said earlier on Monday he supported the police in "taking whatever action is necessary" to protect people seeking medical care and health-care workers. 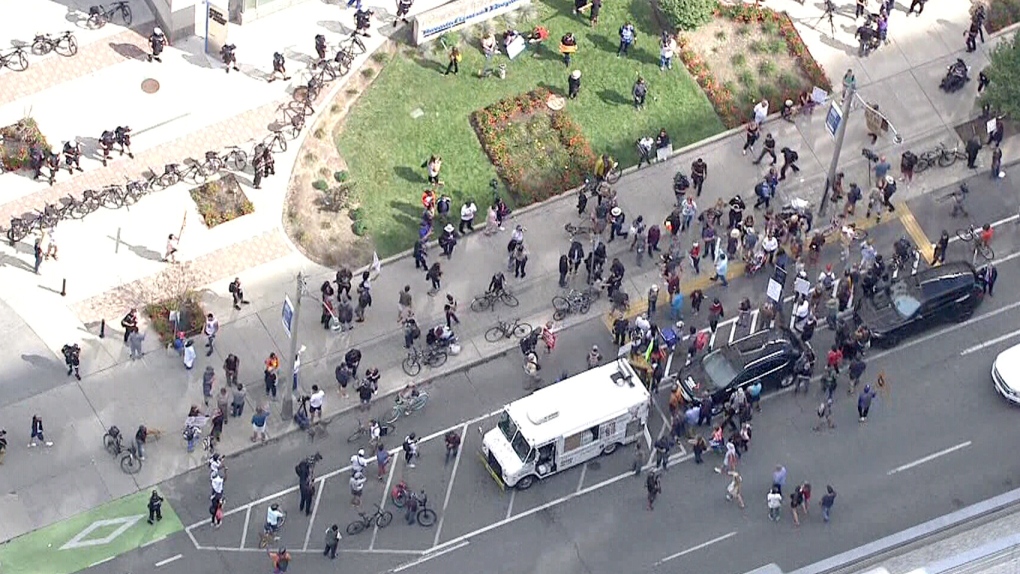 Protests take place outside a hospital in Toronto on Monday, Sept. 13, 2021.

"I just find it completely unacceptable," Tory said. "It's just inconceivable that anyone could be that irresponsible or that misdirected."

Premier Doug Ford also voiced his opinion about the protests, calling them "selfish, cowardly and reckless."

"Our health-care workers have sacrificed so much to keep us all safe during this pandemic," Ford tweeted Sunday. "They don't deserve this kind of treatment — not now, not ever. Leave our health care workers alone."

Meanwhile, The Ontario Nurses’ Association (RNAO) and the Ontario Medical Association (OMA) issued a joint statement on Sunday calling for “safe zones” to be designated around hospitals.

"We respect democracy and the rights of people to protest but these must not be held anywhere where they block entry and exit to health-care facilities," the statement said. "The RNAO and OMA also say charges must be pressed against anyone engaging in harassment, aggression or hate speech, if these protests take place."

NDP Leader Andrea Horwath has also called for safe zones to be declared around hospitals.

Ontario’s vaccine certificate program is set to launch on Sept. 22.