TORONTO -- Police are investigating after a subway train on Line 2 was vandalized with racist graffiti in what the TTC says was a “clear hate crime.”

Dionne Callaghan tells CP24 that she was on her way home from work at a hospital when a she spotted a woman pointing at her and “ranting” from across the train.

She said that the woman’s child was scribbling on the wall of the train with a marker at the time and at some point the woman took the marker and used it to write a racist message.

“I was just on my way home from work and I sat down on the train and a woman just started pointing at me. I had my earbuds in and I couldn’t hear what she was saying but I could see that she was saying the N word so I just sort of looked away from her,” she told CP24. “I then looked up again and noticed that her child was scribbling on the wall and as I looked up she grabbed the marker from her son and sribbled a message. She pointed at me, she scribbled a message and then she gave her child the marker back.”

Callaghan said that she was “in a state of disbelief” after the exchange because she has never actually been the victim of “an overt act of racism." 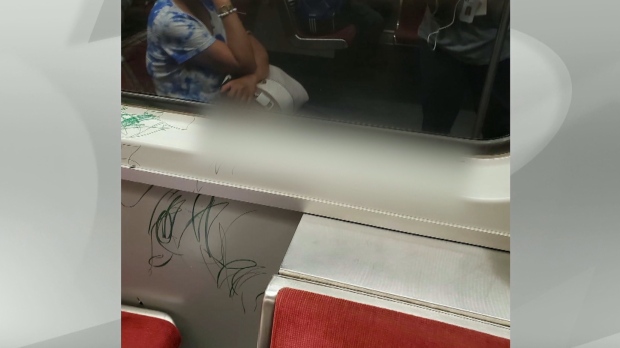 She says the woman eventually got up to leave but before doing so pointed at her again and pointed at the racist message.

“I believe that silence is violence and If I had seen this act being directed at somebody else I would have stepped in,” she said. “I think as a people we need to stand up and take notice and make people aware that this is not OK behavour.”

Callaghan said that after positing about the incident on social media she has since been contacted by people who recognized the woman and told her that she has a history of "targeting other people of colour in the apartment building she lives in."

"This isn't the first time for he so I would like to see her brought to justice," she told CP24.

The TTC said the train was immediately pulled from service after the graffiti was reported.

TTC spokesperson Stuart Green told CP24 it was mortifying when they became aware of the incident.

Green said two reports were submitted to police as someone flagged the racist graffiti to the TTC before Callaghan. The train did not have any cameras.

The TTC will do everything and anything it can to work with police to get it quickly resolved, he said.

He noted that TTC CEO Rick Leary will personally speak to Callaghan and offer his apologies.

"It doesn't matter if it's a TTC property or anywhere in public, it's unacceptable," Green said.

"It's bewildering that in this day and age or in any day or age frankly that this is still happening and happening in a city like Toronto, which is so wonderfully diverse."

Responding to this incident and to the nooses found at construction sites in downtown Toronto, Mayor John Tory tweeted that he condemns these acts and that anti-Black racism is unacceptable.

"I am sorry the woman on the TTC and the workers on the construction sites experienced these despicable acts of racism," Tory tweeted.

Police tell CP24 that they will be following up with Callaghan today and filing a formal report.

No suspect description has been released at this point.