TORONTO -- Accused killer Kalen Schlatter took the stand in his own defence at his murder trial on Monday morning, telling the court that he felt “terrible” for leaving Tess Richey alone at the bottom of an outdoor stairwell on the morning she was strangled to death.

“I should have stayed with her,” Schlatter said during his testimony in a Toronto courtroom.

Schlatter has denied killing Richey but admitted that in the early morning hours of Nov. 25, 2017, he and Richey “made out” and “felt each other up” in an exterior stairwell of a building under renovation near Church and Dundonald streets.

Schlatter met Richey for the first time just hours before police believe she was killed. Richey and her friend Ryley Simard had spent the night partying at Crews and Tangos, a popular bar in the city’s gay village.

Schlatter was also at Crews and Tangos that night but testified that he didn’t interact with Richey or Simard until after the bar let out shortly after 2 a.m.

The jury heard that Schlatter briefly spoke to Simard outside the bar and the accused said he later “bumped into” the two friends while he was on his way to get pizza at the end of the night.

Schlatter said Simard introduced him to Richey, who quickly opened up about a recent breakup.

During his testimony, Schlatter said he told Richey that her ex-boyfriend sounded like an “asshole.” He said he suggested that the group “egg” Richey’s ex-boyfriend’s house.

Schlatter says Richey was alive when he left 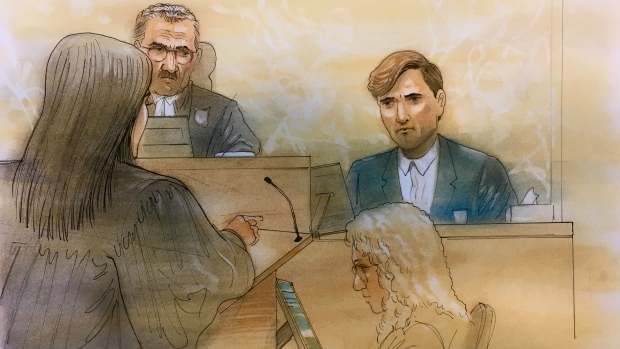 Schlatter testified it was Richey who asked to kiss him when the two were alone and she was the one who led him down the laneway toward the stairwell.

He told the court that he and Richey made out at the bottom of the stairwell and when he brought up the topic of sex, Richey informed him that she was on her period.

Schlatter said at one point during their encounter, he ejaculated in his pants and was “embarrassed” by the incident.

When the two were finished fooling around, Schlatter said, he asked Richey to come back to his parents’ house, an invitation she declined.

Schlatter told the jury that he also offered to stay with Richey in the stairwell to keep her company, but she told him, “You can leave now.”

He said he told her to “have a good evening.”

Video surveillance footage previously presented in court showed Richey and Schlatter walking hand-in-hand down the laneway toward the stairwell at around 4:14 a.m.

Approximately 45 minutes later, Schlatter is spotted on camera walking back down the laneway alone.

The accused said Richey was alive when he left her that morning.

Richey’s lifeless body was discovered days later by her mother and a family friend in the same stairwell where Schlatter said he left her.

Evidence presented in court showed that Schlatter’s saliva and semen were found on Richey’s clothing after her body was discovered.

The Crown alleges that Schlatter sexually assaulted and strangled Richey to death after she rejected his sexual advances.

When directly questioned by his lawyer about whether he killed or sexually assaulted Richey, Schlatter repeatedly replied, “Absolutely not.” 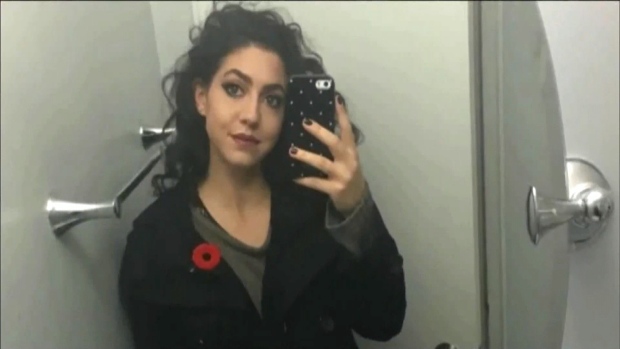 At one point during his testimony, Schlatter appeared to get emotional when discussing Richey’s cause of death.

The accused, who said he has a slight speech impediment, began to stumble on the words “neck compression” and “strangulation.” He took a long pause, dabbed his eyes with a tissue, and grabbed a glass of water before continuing to speak.

Schlatter told the court that he only learned of Richey’s death on Dec. 10, 2017 when homicide detectives released security camera images of a person of interest wanted in connection with the case.

The 23-year-old took the stand Monday following weeks of testimony from dozens of witnesses for the Crown, which closed its case last week.

On Tuesday, the jury heard from a jailhouse informant who told the court that Schlatter actually confessed to murdering Richey.

The informant, who shared a cell with Schlatter in 2018, said the accused admitted to choking Richey to death with a scarf and ejaculating on her.

The cellmate, who cannot be identified under a court-ordered publication ban, said Schlatter also admitted to stealing $60 and a “chain necklace” from Richey’s purse after killing her.

He said Schlatter used the money he took to pay for a cab ride home.

He added that Schlatter said he was concerned about “getting traced” so he took a cab halfway home and then an Uber the rest of the way.

The cellmate, who has a lengthy criminal record, also said that while he and Schlatter shared a cell, they “brainstormed” ideas about other ways Richey could have died, including by suicide or at the hands of another suspect. 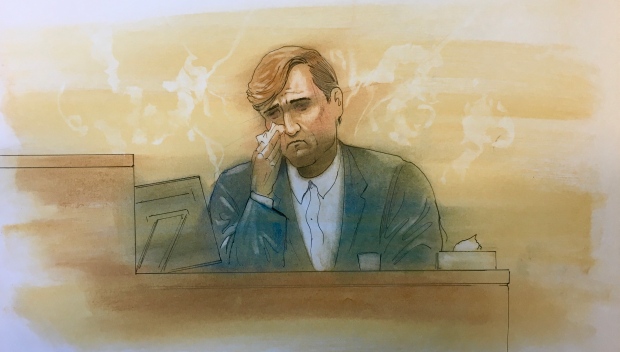 Schlatter told the jury that he did share certain details of his encounter with Richey with his cellmate but did not confess to killing her.

He also denied stealing from Richey and said he only took two modes of transportation home because he felt sick from drinking and had to get out of the cab to vomit.

The informant also told the court last week that during his conversations with the accused, Schlatter showed no “concern” or “remorse” for what he had done and was primarily focused on how to get out of jail.

On Monday, Schlatter asserted that he was so upset over what had happened to Richey that he would sometimes cry at night in his cell.

The Crown is expected to begin cross-examination of Schlatter on Tuesday morning.