TORONTO -- For the first time, jurors in the Kalen Schlatter murder trial saw photos of the victim Tess Richey. But unlike the photos that were distributed publicly in the days following her disappearance, these photos showed the 22-year-old dead at the base of an exterior stairwell.

A series of photos, introduced into evidence by the Crown on Tuesday, showed Richey’s body laying on her right side at the base of an outdoor stairwell at the side of a home in Toronto’s Church-Wellesley Village that was under construction at the time.

In the photos she is fully clothed, wearing a black shirt, and black pants. Her green coat is shown to be on the ground near her body, and her pink purse appears to be upright and open beside her.

The photos were shown as Toronto Police Service Const. Robert Chevalier continued his testimony on the fourth day of the Schlatter’s murder trial.

The Crown alleges that Schlatter strangled Richey to death and left semen and saliva on her clothing before abandoning her body at the bottom of the outdoor stairwell. 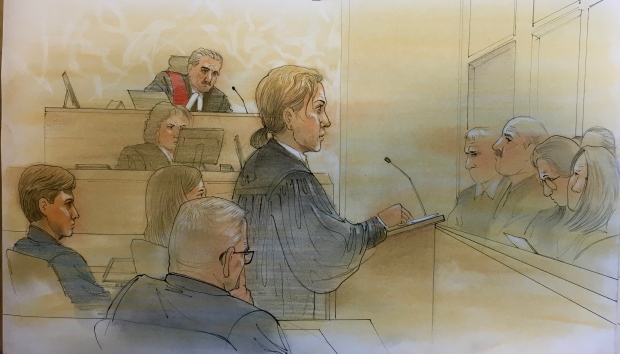 Schlatter has pleaded not guilty to a charge of first-degree murder.

Chevalier was the first officer on scene after he heard Richey’s mother discover her daughter’s body and scream.

The photos show, and Chevalier described, what appeared to be gravel dust on Richey’s arms and in her hair. Her face appears discoloured in the photos, and Chevalier testified that he saw a mark or bruise over her left eye.

Chevalier testified that the photos were taken several hours after the body was found, and after the coroner had attended the scene.

Chevalier had earlier testified that as an officer with the Toronto Police Neighbourhood Community Response Unit, he was working in the Church-Wellesley Village on the day Richey’s body was discovered. On Monday he told jurors that he met Richey’s mom on that day, and had offered to check an address on Dundonald Street that she had flagged.

It was there that Chevalier testified that he and his partner heard a scream coming from nearby 582 Church Street.

Chevalier said he and his partner exited the rear of Dundonald Street, and travelled around the corner to Church Street to find Richey’s mother and her long-time friend standing on the sidewalk out front of the under construction home.

Chevalier told jurors that he approached the stairwell at the side of the building, and when he looked down he immediately recognized the woman’s body laying at the base of the stairs from photos that had been distributed by her family.

“I thought ‘oh my God, this is her,’” Chevalier testified on Monday, “She didn’t look like she was alive at that point.”

Chevalier’s partner Const. Amber Smith testified that when she arrived at the scene she saw Richey’s mother and her friend, and described them as “hysterical.”

“I looked to where she was pointing down the stairs and I saw a female body down there,” Smith told jurors, adding that she knew it was Richey because had seen previous photos.

Members of Richey’s family, including her mother, who have been in court for majority of each day, left the courtroom before the evidence photos were shown.

As that series of eight photos were shown to the jury, the accused became visibly uncomfortable.

Looking at a monitor on the table in front of him, Schlatter covered his eyes as the photos progressed, and appeared to be crying, wiping his eyes and nose with a tissue.

Friend, out with Richey night of her death, takes the stand

Simard told the court that she and Richey were friends as teenagers in North Bay, but had lost touch in the years that followed.

After realizing they both were in Toronto, she reached out on Facebook and the pair made plans to meet on the night of Nov. 24. Simard said she chose the bar 'Crews & Tangos' on Church Street as it was an establishment she was familiar with.

Simard said she and Richey met inside the bar and then drank and danced for some time before Richey was asked to leave the bar by staff because she was too drunk.

In her testimony, Simard said there were many details of that night that she did not recall as she was “quite intoxicated.”

Simard said she remembers meeting Schlatter outside the bar, and later remembers kissing him next to a hot dog stand near Church and Wellesley. She said she also remembers lying on the ground outside of a residence on Dundonald Street while Richey and another woman spoke for some time.

Simard said there was a man present at the time, but admitted she can’t remember if it was Schlatter.

Simard said she left to go home around 4 a.m. after receiving a text message from her partner. She said Richey was upset and asked her not to leave, but she did so anyways, walking west on Dundonald to Yonge Street.

Simard said the next day she tried to contact Richey by phone, telling jurors “I tried to see what she was doing the next day but got no response.”