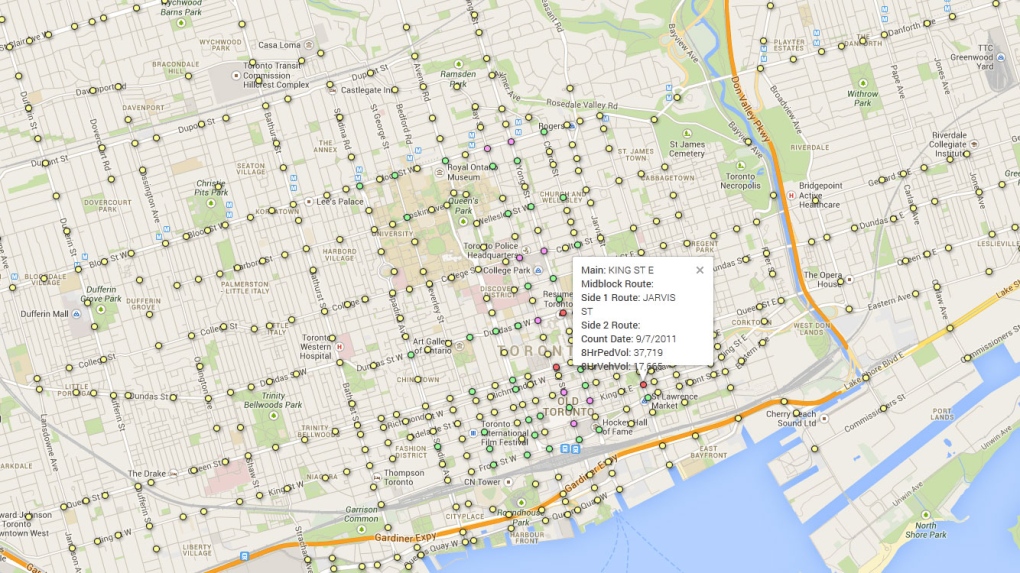 The City of Toronto has published traffic data from 2011 in an interactive map.

Based on 2011 data, the map -- published by CTV Toronto on Saturday morning -- compares pedestrian and vehicle traffic at intersections with signal lights across the city.

For example, the tourist hub of Yonge and Dundas Streets boasted 48,337 pedestrians and 16,515 vehicles in an eight-hour period in 2011. In one hour, more than 6,000 pedestrians and 2,000 vehicles travelled through the intersection.

Just a block west, at Queen Street West and York Street, only 2,620 pedestrians and 6,938 vehicles used the intersection, only a small fraction of traffic seen at Yonge-Dundas and Bay-Queen.

Also notable is the fact that the Queen-York intersection saw significantly more vehicles than pedestrians.

The map shows data collected across the city from 2003 to 2011, though the majority of the traffic counts were collected between 2007 and 2011.

Given the lengthy collection period and the fact that three years have passed since the last survey, the numbers may not be accurate today.

However, the ranking of busiest intersections is likely still accurate, with Yonge-Dundas, Yonge-Eglinton and Bay-Queen in the lead for vehicles and pedestrians.