Four firefighters were injured, one critically, after parts of a warehouse near Toronto's Pearson International Airport collapsed during an early morning fire.

Paramedics were called to the scene of a massive three-alarm fire at 2797 Thamesgate Dr., north of the airport, to treat four firefighters who had sustained injuries.

All of the injured were taken to hospital, Peel EMS said. One of the firefighters was transported to hospital in critical condition.

Mississauga Fire Deputy Chief Kevin Duffy said that one of the injured suffered from smoke inhalation, and the three others were injured when part of the building collapsed.

Fire Chief John McDougall said the firefighter with the most serious injuries is recovering in hospital and is in critical but stable condition.

Officials say the fire started at approximately 4:40 a.m. Wednesday morning. Photos and video from the scene showed large flames and clouds of smoke billowing out of the building. Duffy said the blaze escalated very quickly, and that soon after firefighters arrived there was an explosion which caused part of the building to collapse.

Fire officials said the building was used as a storage facility for imported goods and contained butane lighters and aerosol cans.

Mississauga Fire and Emergency Deputy Chief Greg Laing said that firefighters were shocked at the extent of the fire and the blast.

"Instantaneously, just boom… the building's destroyed, it's on the ground… walls are coming down on people," he said, describing the explosion that brought down part of the building.

"It's unprecedented, I don't know how to describe it,” Laing told CTV Toronto.

While there were no concerns about toxicity in the smoke coming from the building, Ruttan said people in the area were advised to avoid breathing in smoke if possible.

Mississauga Mayor Hazel McCallion told reporters the owners of the warehouse had not filed an occupancy permit for the building with the city.

"We don't know of any occupancy permit that was granted by the city for the building to be occupied with the type of material," McCallion said during a news conference Wednesday afternoon.

McCallion said firefighters had no idea what they were up against when they arrived at the scene because the building was vacant the last time it was inspected.

“We have an occupancy permit for good reason, so that our firefighters and police department knows what’s stored in the building or what operations are in conducted in the buildings,” she said.

“It’s so important that the fire department knows what products, especially chemicals and combustible items, are stored in a building so that when a fire occurs, they know whether it’s water of foam that should be applied to the building,” she added.

"It just kept popping … one after another… I don't know how long it went on for," one area resident said. "It was scary."

An industrial area south of the fire has been evacuated and nearby residents are being advised to close their windows as a precaution. 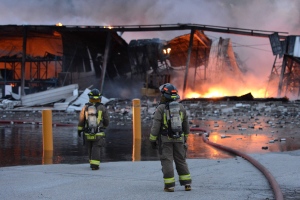