Within the crowd of thousands that filled the streets of Toronto on Friday for the city’s climate change rally were many elementary school students, hoping to raise their concerns and drive change.

“Every time we pollute it gets warmer and warmer every year. Ice in the North is melting and polar bears don’t have places to live,”10 year-old Alexander Gugushvili-Shvili told CTV News Toronto. “I hope that we all stop pollution, the whole world.”

Zoe Keary-Natzner, 12, spoke to the crowds from the stage.

“I felt like I really had a responsibility to do something,” she said after the rally. “I felt like I had to speak, or else I’m not going to be doing my part.” 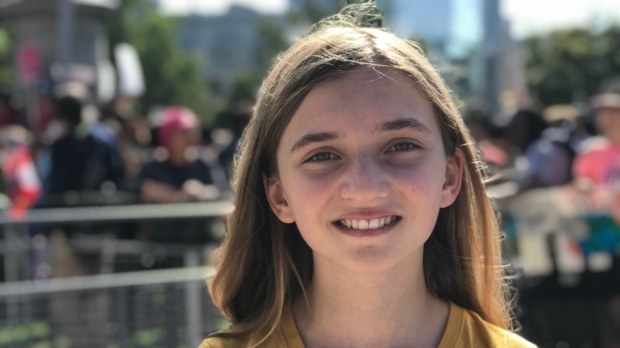 Ellen Salewitz, who is 12 years old, came to the rally with friends and said could feel the excitement.

“It makes me feel happy that everybody is together in this and it doesn’t matter how old you are. People are coming together to talk about these serious issues.”

Many young people said they were inspired by Greta Thunberg, a Sweedish teen who has taken a stand against global warming. Salewtiz said she wanted want to join Thunberg in her plan to change the way people think and start saving the planet.

“I can understand what it’s like to do something big now because or her.”