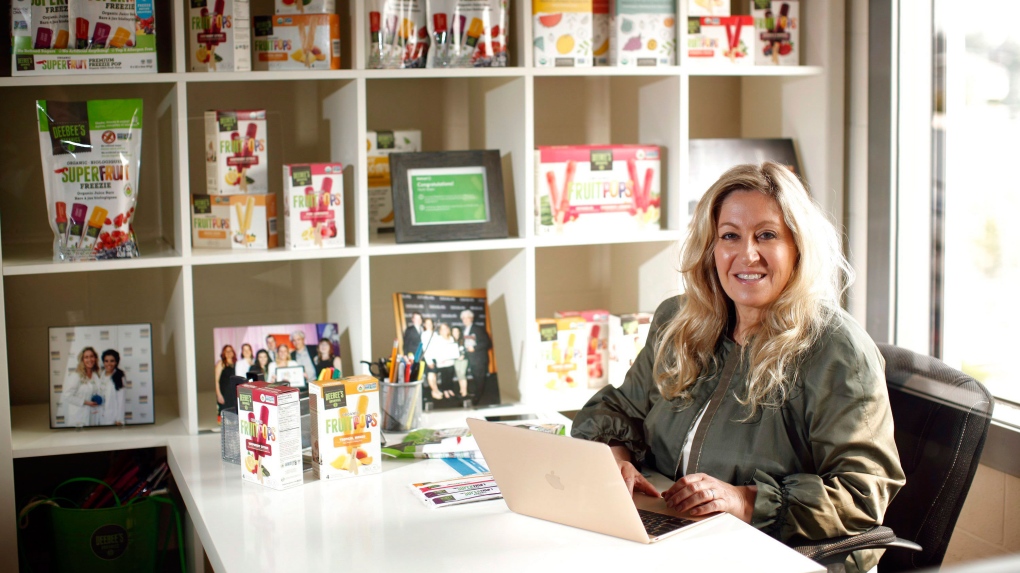 DeeBee Organics owner Dionne Laslo-Baker is photographed at her office in Victoria on Monday, August 13, 2018. When Dionne Laslo-Baker sought a bank loan to expand her burgeoning organic popsicle and freezies business in 2014, she was "shocked" by the feedback she received from one of the bankers. THE CANADIAN PRESS/Chad Hipolito

TORONTO -- When Dionne Laslo-Baker sought a bank loan to expand her burgeoning organic popsicle and freezies business in 2014, she was shocked by the patronizing feedback she says she received from a male banker.

"One of them said not only that they couldn't fund us, but, why am I bothering to do this?" she said. "I have a very successful husband, who makes a very good salary... Why are you kind of disrupting the peace?"'

Her request for funding to scale up B.C.-based DeeBee's Organics was "quashed without question." It was one of the first times she realized that women entrepreneurs face bigger barriers than their male counterparts.

And a lack of access to capital is one of the biggest challenges for women entrepreneurs, a new study suggests.

The wage gap between men and women has been long-standing -- with women on average making 74 cents for every dollar of annual salary made by men, according to the most recent Statistics Canada data --but research from by PayPal Canada and consulting firm Barraza and Associates suggests that this dynamic also applies to those who own small-and- medium sized businesses as well.

Businesses owned by women generate an average of $68,000 less revenue than men who run similar businesses, representing a gap of 58 per cent, according to the online survey of 1,000 Canadian small and medium-sized businesses between Jan. 26 and Feb. 28.

The findings suggest that the median annual revenue for businesses owned by men across six different categories of firms ranging from manufacturing to services was $118,000, but $50,000 for those owned by women. Online surveys cannot be assigned a margin of error because they do not randomly sample the population.

The gender revenue gap is slightly smaller for businesses operating online, at $55,000 or 44 per cent, compared to offline businesses which had a gap of $71,000 or 64 per cent, according to the survey.

Becky Reuber, professor of strategic management at the Rotman Business School at the University of Toronto, cautions it's difficult compare businesses based on the gender of the owner, as there is some research that suggests that women tend to start businesses in sectors that have lower-growth rates, such as service-based businesses.

For example, there are fewer women engineers and in turn fewer with the background to start high-tech businesses, which often see higher growth, she added.

Still, when you compare the performance of similar businesses owned by men and women, recent studies have shown that there is no difference, said Reuber.

That being said, there is a difference when it comes to seeking capital from investors, she said.

"There is evidence that some stereotypes play up in that. And women may have more difficulty getting high value investment," she said.

That is also what Laslo-Baker found.

When she wanted to raise more funds in 2014 for DeeBee's and met with some food industry players, one of which told her they would consider investing if she got a "man in here who could be the CEO and run this company."

"I thought, 'What? A man in here? I've already taken this product to Canada and parts of the United States. Is that nothing?"' Laslo-Baker said.

Despite these challenges, DeeBees has continued to expand. Its frozen treats are sold at major grocery chains such as Metro and Sobeys, and in every Canadian province and 20 states in the U.S. including California and New York.

The company also has a commercial loan from Bank of Montreal, backed by Export Development Canada, and at DeeBee's last capital raise, which closed in June 2018, the company's enterprise valuation was $16 million, she added.

She believes attitudes are slowly changing, with more people expressing that her background as a mother and female entrepreneur is an asset not a drawback, she said.

"As more women succeed, it's going to pave the way."

The Liberal government has prioritized gender equality and increased participation in the workforce. Among the many initiatives aimed at this goal as part of its latest budget, Ottawa has allocated $1.4 billion over three years from the Business Development Bank in new financing for female entrepreneurs and $105 million over five years to help the regional development agencies support women-led businesses.