Shortly before 11:30 a.m., police received reports about a collision at St. Clair and Boon avenues, west of Dufferin Street.

Police said the driver had ran a vehicle off the roadway and struck a woman who was pushing a stroller with two children inside before crashing the SUV into a store.

“It appears as though an 82-year-old male who was driving a Nissan Pathfinder was attempting to park, mounted a curb and struck a woman who was pushing a stroller,” Toronto police Duty Insp. Michael Williams said at the scene.

A woman in her 30s, who is the children’s caregiver, was trapped under the vehicle but was freed shortly after by emergency responders, police said.

“She was taken by emergency run to a local trauma centre with life-threatening injuries. The two children, very luckily- ages two and five- received very minor injuries. Only one of the children had a cut to the chin,” he said.

The driver of the vehicle and both children were transported to hospital as a precaution, Williams said.

In a security video obtained by CTV Toronto from a store across the road, a Black SUV is seen beginning to parallel park. At first, the SUV slowly reverses into the parking pot. But for some unknown reasons, the vehicle appears to speed up and jump the curb, striking a parking meter and a woman walking by with two children.

Williams said that the collision appears to have been an accident.

“He [the driver] has been cooperating with our officers and is quite shaken up and upset by this,” he said.

Williams added that the situation could have been much worse if it weren’t for the woman’s heroic actions.

“From witness accounts we’re getting so far, she actually sounds like she’s a hero. She possibly pushed this stroller out of the way of the vehicle. When officers arrived on scene, the stroller was actually partially pinned between the vehicle and the wall” he said. 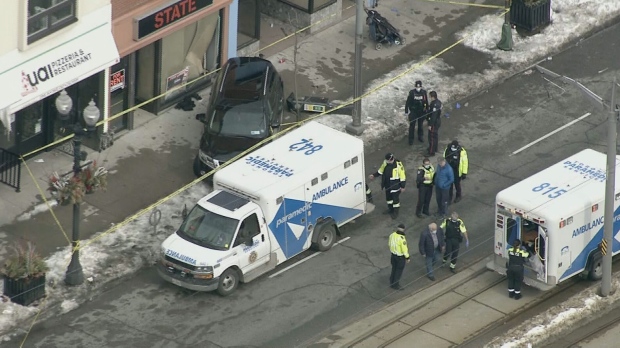 Dr. Gary Klein works at a dental office in the plaza where the collision occurred and helped console the woman until emergency responders arrived.

“All I could tell is that she probably had significant head injuries. We were just trying to console her and calm her knowing that emergency [crews] were on their way and Toronto Fire showed up momentarily. It was the worst accident I’ve ever seen,” he told CP24.

“Honestly, [I went into] mom mode. I have three kids of my own. All I thought was my boss ran to her, I ran to the babies and there were a lot of people around them and no one was really doing first aid, so we just said ‘okay everybody move,’” she said.

Roads in the area are expected to be closed throughout the afternoon as police investigate.